In the midst of his rise to stardom, Simon Zebo has split Irish fans’ opinions in a manner that we’ve never witnessed before. This piece will take both the positive and negative sides of the argument into account to find an accurate conclusion regarding the Cork winger’s ability.

SIMON ZEBO BROKE into the Munster team in 2010, making his debut against Connacht. The youngster’s schools performances for PBC meant that much excitement would surround him each time he took the field. Initially, this applied to his showings at academy and ‘A’ team levels but the opportunity to see him tested in the professional game was a real treat for any hardcore fan. Unfortunately, that game in the Sportsground would be Zebo’s only appearance of the season as he picked up a yellow card and failed to get on the scoresheet.

The following season however, he would play eleven times under the guidance of Tony McGahan, scoring two tries. This was slow progress for the 21 year old but improvements were becoming evident as Zebo’s decision making and intelligence were particularly on the rise but still far from perfect. The 2012/2013 campaign though, was really the start of something special.

‘Zeebs’ made his long awaited Heineken Cup debut away against the Scarlets on 10th of December and managed to keep his place for all six of the group games. His true awakening came about in the away trip to Northampton Saints where he scored a memorable hattrick to send Munster into the quarter finals. Munster would be defeated by Ulster in the eventual knockout but Zebo once again touched down to catch the eye of Irish coach Declan Kidney and ultimately the eye of Lions boss Warren Gatland.

Since then Zebo has rarely looked back having started on the left wing for all but one of Ireland’s successful Six Nations campaign of 2015 and his importance to the province has been unquestionable as he has finished the last four seasons as Munster’s top try scorer. However, between this great success story are some highly interesting talking points, as tackling and decision making stand out as factors that get in the way of Zebo establishing himself as a world class wing.

Zebo has always been a dangerous attacker but he also has plenty of other assets that have seen him get to the stage that he currently acquires. One such quality of Zebo’s is his dominance in the air:

In the above clip, Zebo shows his pace from the drop out and leaps high in the air to win possession for Ireland. His jump and ability to make the ball his own is a crucial skill to posses in modern rugby as physicality has grown to dominate the sport. In the tight channels these days, giant forwards such as Will Skelton make the yards, while centres such as Mathieu Bastareaud have emerged as further bulldozers out the backs and now even the wingers, previously only recognized for their pace and finishing must now show their strength too, but in the air. As Zebo has a 6’2 frame he is perfect for these situations and has proved time and time again that he is an extremely reliable option for club and country in this department

As a result of growing up as a GAA player like many Irish rugby stars, his skill set has developed to the highest standard and head coach Joe Schmidt has utilized this cultural advantage to the great success of his team. Zebo strived at this in the 2015 Six Nations championship but his running rugby offerings were unfortunately lost within the style of play.

Zebo’s stats speak for themselves. Provincially, he has been the standout Irish player over the last three years as he has often popped up in intelligent positions, challenged defenses and finished with excellence. The Pres man is thus expected to score every time he steps onto the pitch for Munster and when he doesn’t dot down, there is a sense of disappointment – such are his high standards.  Take this video for example:

Zebo comes in off his wing as he loves to do so often and bursts through a hole in the Argentine defense showing all of his pace. This a typical try of his and one that highlights his assets perfectly. The vision to spot the gap, the resulting strong line and then the burst of pace to get over for the try would have all be very satisfying factors for Joe Schmidt to have witnessed.

The left-footed winger has a giant boot on him. On many occasions it has proved to be a secret weapon of his as in tight situations, big relieving clearances have been made. Not only is Zebo’s kicking powerful but it is also accurate and he has therefore been used to kick for touch on occasion for Munster instead of the right footed Ian Keatley. This is yet another weapon in the 25 year old’s arsenal that has prove useful time and time again throughout his career. 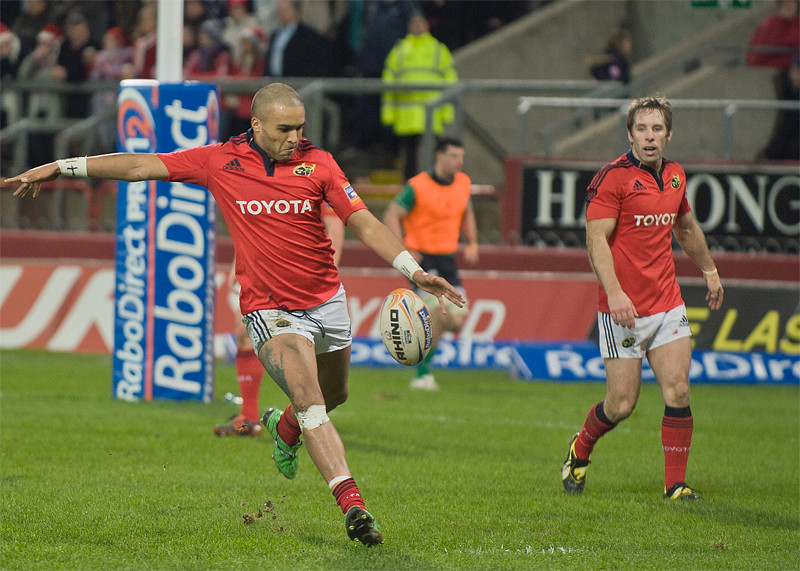 Tackling has become an ever lasting issue in Zebo’s career. Defensive awareness of his has come on leaps and bounds and you can’t fault him for effort but the technique in which he attempts to bring opponents to ground is rather poor.

Zebo generally approaches the contact area in an upright position and tries to scrag his opponents to the deck.  Unfortunately, this element has left the Thomond Park faithful fuming as it has actually proved unsuccessful quite regularly.

In the motion of tackling, his height leaves him vulnerable to being shoved out of the way by the pure upper-body strength of opponents. This occurs as unlike his teammates, Zebo tends to prefer dragging down opponents rather than getting down and dirty and hitting guys below the waist. The approach allows Zebo to remain balanced and in position but there is a high risk of being bounced off and leaving the defense exposed as shown in one such case below.

A player that is unable to tackle should simply not grace the international stage. However, Zebo actually has some impressive defensive statistics up his sleeve to issue a strong defense, but just how accurate are they?

In most cases the Corkman is back peddling while grappling away until a teammate arrives to help take down the attacker. When you consider the yards conceded by Zebo in comparison to Bowe etc. it is clear that he is not the strongest defender in Ireland’s deck, but as a result of the improvements that have been made while working with Joe Schmidt, his primary issue is still quite distant from being disastrous.

Perhaps an unusual issue arising has been Zebo’s tendency to goose step rather than run in open field positions. His swivel in attack had previously proved to be one that broke defenses but has now become predictable and over used. Defending wingers have learned to cope with the variation as a result of the repetition and the ‘one trick pony’ tag has been attached to Zebo as a result. This has denied Zebo from being as lethal as he once was but the problem doesn’t stop there.

When Zebo finds himself in space occupying the back field, he will occasionally decide to run it out. As defenders approach him from afar he can then be seen hopping from foot to foot rather than sprinting and challenging the defensive line. Understandably, he could be vulnerable to a big tackle if he is too predictable but by stalling in the backfield he is allowing the defensive line the time to push up the field and Zebo is hence, losing yards by being so unnecessarily twinkle toed. It would be extremely refreshing to see him running at gaps in pressing defenses in the future and establish himself as a more unpredictable and dangerous  attacker.

Zebo has been the most exciting homegrown player that Munster have brought through in terms of flair and confidence but has suffered criticism by being ever so distant from the traditional Munster values. The Corkman still has plenty to learn in all areas but after working in Joe Schmidt’s green machine for the next three months we could well be seeing a superstar on our hands upon his return to the red jersey.