This year saw the development of a local legend as he grew into the head coach position of Munster rugby.

Anthony Foley was named as Rob Penney’s successor last summer despite his only previous coaching experience being forwards coach for the province and head coach of the Irish Wolfhounds against the English Saxons. The Killaloe man has subsequently found it difficult to get the full potential out of this strong Munster side particularly on the European stage.

Under Rob Penney and Simon Mannix, Munster had adapted a back dominated game plan heavily focused on width. After an initial season of frustrating “coast to coast” rugby, Munster became very strong in both defense and attack. In 2014 against Toulouse for example, Munster showed signs of having a game plan that gained yards and scored tries. With Axel coaching the forwards and making Munster one of the strongest sides in Europe at the lineout and the maul, everything was coming together for the young squad with bags of potential.

Unfortunately it was sadly confirmed that Penney and Mannix would leave for Japan and France respectively. The two Kiwis left Munster in the hands of a coach who only observed the game as a forward and was unable to develop Penneys style of play further. Ultimately, this made Munster go backwards as a team and this season has proved that Munster will struggle to get results without imagination when up against physical packs (eg. Clermont)

Rob Penney excelled in this part of the game noticing the young talent pool Munster has to offer. However, where Penney excelled, Axel has struggled hugely. Foley has failed to notice many young players who could have a great career at Munster. As a result, these players such as JJ Hanrahan are trading the southern province for opportunities elsewhere as Foley has failed to give them playtime.

Along with Hanrahan, Penney was able to notice such talent as Duncan Casey, Dave Foley, James Cronin and many more which are key to Munster today. Foley meanwhile, has only really introduced players like Jack O’Donoghue as well as club-men Kevin O’Bryne and Neil Cronin. Although these players are great to watch, it could be argued that they were forced selections due to a long injury list and the absence of internationals.

On the overall, it is evident that the talent wasted, out numbers the newly blooded youth under Axel. A long list of players such as JJ Hanrahan, Sean Dougall, Paddy Butler, Ivan Dineen and Johne Murphy are leaving Munster due to the coaches safe selections of starting the same players over and over again whom are stretching to 30 years of age like Ian Keatley and Duncan Williams.

Munster  have become unable to match the quality of European competition this season and that is due to the play style adapted by Foley and of course, the tough pool we drew in his first season as head coach. Both France and England have pushed far above Ireland in financial status and with IRFU rules forbidding expensive transfers; Munster have been unable to find a good centre following the exits of both Casey Laulala and James Downey. This has made the province pay the price as they are unable to match the skill and class of backlines from both France and England with Denis Hurley having to change position to centre to partner Aussie journeyman Andrew Smith.

While Munster didn’t exactly find themselves in a third consecutive European semi-final, the league campaign has been impressive. Foley helped his team to spend long periods of the season at the summit of the Pro 12 table and claimed a vital home semi-final spot to reward such consistency. In the last number of regular season rounds, the centre pairing of Denis Hurley and the injury free Keith Earls rejuvenated the side to open running rugby which has seen Munster score the most tries out of any team in the Pro 12.

Munster went on to the Guinness Pro 12 final against Glasgow Warriors by defeating the Ospreys in the semi-final. Despite a poor kicking performance from Ian Keatley, Foley orchestrated a game plan to outscore the Welsh.  The set-piece was executed as you would imagine from the former Munster captain’s men and importantly, CJ Stander supplied his usual go-forward ball. The victory would give Axel the opportunity to finish on a high by winning the league. However, Munster had a disastrous defeat to the Glasgow men, who played magnificent rugby to bring them straight back down to earth.

A strong showing domestically made up for Foley’s third place finish in the group of death. However, his man-management skills are unforgivable: 6.5/10

For next season,the same result will be seen as a failure. New signing Francis Saili along with the injury free brigade including Tyler Bleyendaal, Mike Sherry, Gerhard Van den Heever, Donnacha Ryan, Keith Earls, Dave Foley and Robin Copeland should qualify Munster for at least the knock out stages for both competitions despite the departure of Paul O’Connell.

One thought on “Anthony Foley: Season In Review” 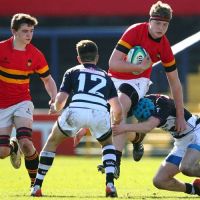