AN INSIGHT into Denis Hurley’s contribution to Munster in 2014/2015.

Over the last two seasons, Munster have seen former fullback and wing Denis Hurley convert into a strong running, offloading and defensively rock solid inside centre. The St Munchin’s student, played in the centre during his school years but has since spent his professional career primarily as a fullback. This position exposed the big man’s lack of pace, but as the skillful player that he is, Hurley had his days in the sun too, namely starting the 2008 Heineken Cup Final against Toulouse. Following the departure of Casey Laulala and James Downey for the 2014/2015 season, there needed to be a rapid fire, ready made replacement to save money for the province. Hurley was the obvious man for the job as his open field days looked numbered. The pure strength and handling ability of the man was unusual for a member of the back three and so, his life as a centre was born.

Early indications of the successful switch came about in the October hammering of Leinster at the Aviva Stadium. His intelligence to pick a line and offload is a real feature of his game that every team needs in their arsenal. One such example of this can be seen here :

Failure to bond with Andrew Smith leads to sticky spell

After this instant impact, Hurley’s performances dipped as himself and Aussie import Andrew Smith failed to have any chemistry together. On a number of occasions the similarity between the pair left a serious lack of creativity in midfield. The reason for this is clear: Hurley works best inside a running 13 who can flourish off of his offloads. Keith Earls makes the perfect partner for ‘Sonny Bill Hurley’ by taking smart lines as we see later on in the season. However, Smith is a different style of player who instead likes to take the ball on in outside channels, in an attempt to unlock wingers or break the defense himself. As shown in the above GIF, it is Dave Foley who runs off of the pop-pass rather than Hurley’s partner. Thanks to the likes of the big lock, the Corkman can still produce a top performance despite having the unsuitable sort of player in the thirteen shirt. Defensively, once again Hurley and Smith never clicked and were torn apart by Sale Sharks in round one of the Champions Cup.

The arrival of South African loanee Pat Howard made a difference as he proved to be a better suited partner for unsung Hurley. The duo were famously thrown into the deep end against Clermont Auvergne in Thomond Park opposite French superstars Wesley Fofana and Aurelien Rougerie. Hurley and Howard were always on the same wavelength and were a formidable defensive unit in this particular match.

As we see in the GIF(right), both Munster defenders have the ability to read the passage successfully. Hurley and Howard blow back the Clermont captain from the short offload as the French side try to create the illusion that they’re shipping the ball out the ‘backdoor’. In the tackle, they both hit Rougerie simultaneously as he gets man and ball, giving Munster a huge boost of confidence in the early stages . Denis Hurley is still a newly established centre at this moment of time but the tackle we see on one of the most respected and experienced midfielders in Europe gave everyone a minute to rewrite their opinions on the ‘workman-like’ and ‘make-shift’ twelve back in December. Although Munster lose the game, Hurley backs up his solid home performance against Saracens with a reassuring job on the World’s best. It was now half way through the season, Denis could be seen as a solid but conservative man for the job. However, a few more impressive showings against Leinster (home) and Glasgow (away) showed off the other knives in his drawer.

Hurley and Earls, the combo of dreams

Keith Earls returned to the Munster team in February and proved to be the creative spark that Hurley was trying to feed all season. A tremendous showing at the official opening of Irish Independent park V Glasgow Warriors was where the partnership came to life. In this match, spectators saw the elements of Hurley’s attacking threat once and for all. He took on hard running lines off of Ian Keatley into the 10/12 defensive channel throughout, in every area of the field. This was hugely successful as he generally broke the first tackle of the debutante Glasgow outhalf Connor Braid. When eventually in the motion of falling to deck after making these valuable yards, the skill of the back hand offload came into play which allowed Keith Earls to have a whole lot of fun.

This continued for weeks to come and even when Earls was on the wing against Connacht, the chemistry between them was exquisite.

Hurley was nominated for the IRUPA Unsung Hero of the Season award as a result of his strong performances but narrowly missed out to Leinster’s Darragh Fanning. Whether he can retain his place with New Zealander Francis Saili arriving next season is debatable, but we are keen to see him remain at twelve. 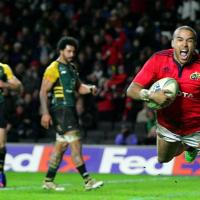 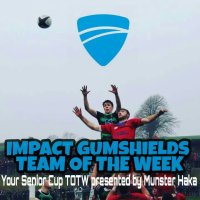