It has been quite a long Summer for us rugby fans in the Irish rain. In fact, you have to go all the way back to May to recall a bit of Munster action – our catastrophe in the Kingspan (which hardly brings back fond memories!)

With a number of departures being confirmed including the legendary Paul O’Connell, things are going to be quite different and we may see the effects of this at first – which is only natural. On the flip side however, it will be exciting to see New Zealand stars Francis Saili and Tyler Bleyendaal come into the frame in crucial positions and to see how Anthony Foley learns from his mistakes in his second season at the helm.

There are plenty of interesting factors which will decide whether it will be a successful season or not, but here are the five biggest things that we would like to see. 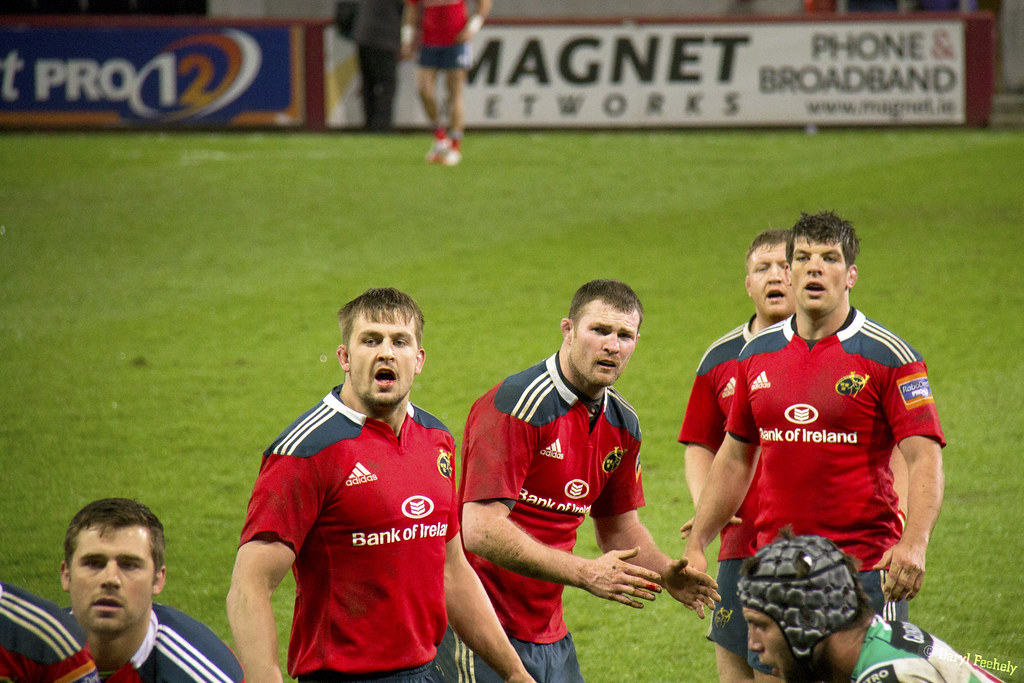 With Donnacha Ryan and Dave Foley looking nailed on for our Champions Cup campaign, Munster definitely still have a hell of an engine room despite the loss of Paulie. The two workhorses have steam coming out of their ears and operate the lineout excellently. Foley also brings an enormous rucking effort to the board as he loves to making a nuisance of himself to frustrate opposition while Ryan, as an experienced flanker can be just as physical. Unfortunately, the duo have quite a bad injury record and this will probably be something that will weaken the pack.

In their absence, the experienced Billy Holland or Donncha O’Callaghan would be the most likely replacements. Holland, to his credit had been going very strongly in 2015, but O’Callaghan despite his legendary status had been quite hot and cold as discipline becomes an issue of his game.

Alternatives would be backrowers Dave O’Callaghan, Robin Copeland and Jack O’Donoghue who have all appeared as locks in the past. DOC2 has shown glimpses of excellence throughout his career, but he has been just as unlucky with injuries as the international pair. Copeland could be a very strong option as he could be wasted on the bench once again if Stander continues with the sort of form that won him no less than 8 man of the match awards last season. Copeland played as a second row a few times with his former club Cardiff Blues and is a proven powerhouse that just needs some game time before he shines. Can he live up to his potential in his secondary position though?  The final option is the prodigal UL Bohs man O’Donoghue who featured as their number five many times in the AIL 1B last Autumn. It would be widely agreed that any form of European experience would help this young talent to grow, but will he be viewed as a realistic option in the management’s eyes?

Yes, there are credible alternatives but Ryan and Foley are by far the strongest combination, regardless of how you look at it. Having both of their grit on the field at the same time would assure Munster of pack dominance – and we all know how important that it is.

We’re all ever so excited to see New Zealand 24 year old Francis Saili to throw on the red jersey and enjoy himself out on the Thomond Park field of play. The 2 time All Black is best known for his running game, his vision to spot a pass and his tendency to play in intelligent kicks behind defenses… To be short and sweet about it, if you get capped twice as a New Zealand centre at this day of age whilst in competition with Ma’a Nonu, Sonny Bill Williams, Conrad Smith, Malakai Fekitoa and Ryan Crotty, then you must be pretty decent.

As a Munster supporters though, it would be very naive to suggest that Saili will work wonders upon his arrival. Settling into a system around new teammates can be quite difficult (just ask Jean De Villiers) and having good balance with a partner is of understated relevance (just ask Andrew Smith and Denis Hurley). However, there’s something about this signing that makes us feel that it could prove very different than previous combinations, if Foley gets his selections on the money.

Denis Hurley was without a doubt, the unsung hero of provincial rugby last season. The manner in which the 31 year old defended, offloaded and carried would make you question whether Munster missed a trick by not moving him from fullback to 12 much sooner. It is well recorded that he did fail to co-operate well with Andrew Smith as they were very similar players but when with the pacey and creative Keith Earls was outside him, ‘Sonny Bill Hurley’s’ offloading game came to life. By bringing in Saili outside of him with Keith Earls and Simon Zebo on the wings, Munster suddenly become a deadly, try scoring machine.

This thought makes me happy.

Dolphin prop James Cronin has shown to be a confident young talent in his first two seasons in the Munster first team. He has scrummaged very capably against Europe’s elite and has also been a real powerhouse in terms of ball carrying. Unfortunately, Cronin has been unable to cement his position as the starting loosehead as Dave Kilcoyne has been preferred by Anthony Foley as a more established option.

However, due to Munster’s lack of depth in the tighthead division with the forthcoming departure of BJ Botha, a switch has been reportedly enforced. If it works out, it will be beneficial for both parties but if the switch fails, Munster could be facing somewhat of a frontrow crisis as Stephen Archer appears as the only remaining tighthead with John Ryan proving to be much stronger on the other side of the scrum.

Therefore, a successful switch would be huge for Munster. Having both ‘Killer’ and Cronin on the field at once would cause serious trouble for opponents as they have both proved to be ball-carrying powerhouses around the park. If Cronin can manage to scrummage as well as he can on the loose side, than this is potentially a massive game changer for both Munster and Ireland in a position that has become recognized as the nations Achilles heal ever since the retirement of John Hayes.

If there is no truth to this widespread speculation then Munster will have to struggle on with just Stephen Archer and John Ryan as tightheads after Christmas. In such a case, we believe that someone like Connacht’s Nathan White should be signed up to offer solidarity in the business end of the season. Anthony Foley’s plans for the frontrow are completely unknown at this point but we’ll have to keep calm and hopefully Munster can work something out, albeit rosary bead territory.

Last season ended in major disappointment for Ian Keatley having flopped in the Pro 12 knockouts and… fans have basically been calling for his head ever since as a result. However, you can’t afford to forget that it actually started off quite excellently for the Dublin born outhalf. Keatley produced big game performances in the Champions Cup against Sale and Saracens leaving big impressions and also went on a faultless kicking streak during that same Winter period. These games were followed up by a number of Pro 12 encounters that saw Munster finish at the helm of the league stages as he managed to keep JJ Hanrahan frozen out of the first 15 but unfortunately, it was all down hill from there for him as he choked when the pressure was finally on, which has raised a number of questions about his mental strength. Not a big game player perhaps? Well his Toulon performance from the previous season would suggest otherwise, leaving people still searching for answers in bafflement and disappointment.

Munster’s standards mean that Anthony Foley can hardly afford to leave this go on by keeping Keatley in the starting lineup and waiting for him to find a consistent high level of performance as he turns twenty nine next season – but I think it’s the selection that he will make .

This is because the only realistic alternative, is our New Zealand recruit Tyler Bleyendaal, and from some detailed research for an article we wrote for RugbyLad, he seems to be just as gifted but also just as inconsistent with the boot, which has left the coaching team without reason to bring him in for Keatley. The problem remains…

Therefore, the best we can wish for is that one of the two men step up to the plate and become important features of Munster’s game, adding an instrumental element to Munster’s kicking and creative play. Having a quality outhalf would make Munster a far stronger team, as we’ve illustrated below.

Yeah that’s right, try and think about having Murray, O’Gara, Hurley, Saili, Zebo, Earls, and Felix in the same backline without drooling all over your screen!

Bring back the good times! Next season despite the loss of Paul O’Connell,  Munster have their best opportunity in a few years to achieve success. The Champions Cup pool draw has been kind to us and if everything else mentioned above goes to plan we should definitely be in the mix of things at the end of the Pro 12 season.

Staring with the Champions Cup…

Blessed. Everything went smoothly at the pool draw as Stade Francais, Leicester Tigers and (drum-roll…) Treviso were confirmed as Munster’s rivals. Without doubt, Munster will have to perform to their full potential to progress, such is the standard of the competition but you would hope that Anthony Foley will be confident of racking up a lot of points by January to earn a favourable quarter final. From there, you never quite now how things will pan out on the day as intensity levels grow and a single mistakes can prove to be the difference between winning and losing. Obviously, going on to win the competition would be grand by us, but in this day of age a quarter final would be respectable for Munster. It’s a very reasonable task but if Foley fails, his time at the top should be cut.

On the whole league side of things, keeping injury free will be crucial. With IRFU’s player welfare, the big guns will be rotated in and out of the team leaving squad players with the responsibility of making the top four. The task will be tougher this time around too as Munster will definitely be hoping for an extended cup run and the lack of depth in positions such as openside flanker and pretty much the entire frontrow will therefore have big questions asked of them. But apart from that, everything’s looking bright.

The first team is looks the strongest in the league for the new season and that’s what matters when it comes down to the last four. Glasgow have lost a couple of important first team options such as DTH Van der Merve, Sean Maitland and NIko Matawalu, Ulster just never seem to live up to their potential and well, Leinster have got Leo. Therefore, you would imagine that as the runners up in 2014/2015, Munster could go a step further next year with Mike Sherry, Dave Foley, Peter O’Mahony, Conor Murray, Tyler Bleyendaal and Francis Saili emerging as potential starters that were absent from the final in Belfast.

It will now be five years without silverware at the end of the highly important season if this final wish doesn’t work out, and this of course would be a  very disappointing stat for the province to swallow. 2015/2016 could either bring Munster back up the ladder of European rugby and lay down the foundations to build to a Champions Cup title challenge or perhaps another disappointing campaign awaits, leaving Anthony Foley’s job hanging in the balance, just like Munster’s future.