Yes, the Thomond Park Sevens are back this weekend and like the rest of you, we can’t contain ourselves! Some of the World’s most entertaining sevens teams playing in one of the world’s greatest stadiums, how could it be better?

To help you enjoy the weekend even more, we are going to give you a sense of understanding going into the world of sevens. This is our guide:

To state the obvious, sevens rugby is a simplified version of rugby union which consists of seven-a-side teams. In rugby sevens, there are three forwards (these do not have to strictly be union forwards) and 4 backline players. The fact that all goal-kicks must be drop-kicked, that the scoring team must kick-off to the opponents and that games only last seven minutes a side are other variations of the sport.

Why is Everybody Talking about the Thomond Park Sevens?

Anyone who attended last season will be able to tell you about the unique atmosphere that this event brings to Limerick.

The carnival vibe is created from all angles as food stands, the fancy-dress, the face-paint and the humour from the crowd all play their part to making it a memorable outing. Not only is everything off the field enjoyable but the rugby is also just as much of a treat.  Munster were well-supported last time out and put a huge challenge forward against much more established sevens sides which brought the crowd together with some passion to vary from the otherwise easy-going sense within the ground. This played a big part in ensuring that everyone enjoyed the weekend too but even without the men in red on the field, fans quickly established favourites with Stade Francais and underdogs Vancouver Bears becoming very popular for their fast-paced rugby and other antics to interact with the Thomond spectators.

Why It Could Be Even Better This Year

The event organizers have granted us with a big treat for the forthcoming weekend as Leinster, Connacht and Ulster have all been entered to contest along with Munster as the rivalries are sure to add an extra edge to the games. Not only will these provinces feature in the sevens but Connacht are also set to face-off with Munster in a friendly directly after the tournament in a 15’s pre-season friendly which is set to feature the likes of All Black Francis Saili (Munster debut) as well as Irish internationals Mike Sherry (return from long-term injury), Kieran Marmion & Nathan White. You can get into this game with your day ticket for Friday with the action commencing at 19:30

One thing that our guide definitely needed was to feature the team that the vast majority of our followers will be shouting on! With many internationals away in camp Joe, the guys that would have perhaps starred for the sevens will instead play important roles for the senior team in the absence of the likes of Keith Earls and Felix Jones. However, there is still some extremely exciting young talents involved.

Cian Aherne, Alan Bennie, Frank Bradshaw Ryan, Jack Cullen, Ryan Foley, Niall Kenneally, Murray Linn, Olly Lyons, Diarmaid McCarthy, Steven McMahon, Tomás Quinlan, Alex Wootton.
a
Standout names are Cian Aherne, Alan Bennie, Diarmaid McCarthy and Alex Wooton who have all featured for the Ireland sevens side over the summer while Cork Con kicker Tomas Quinlan has also had a productive few months having fired Ireland U20’s to victory over Argentina in June with a last gasp strike from the corner.
a
Okay, it’s not quite as strong as last season’s which featured the likes of Ronan O’Mahony, Luke O’Dea, Gerhard Van den Heever among others but Munster have limited resources at the moment. Despite, the concern that was expressed by fans on our Facebook page however, we are still confident that Colm McMahon’s men can shine in the tournament with valuable sevens experience under their belts.

I think it’s about time for a big fat Munster Haka prediction, so we’re gonna help you get an idea of which sides we think will cause problems in Thomond.

Devata Fiji: The current holders of the title can never be written off in any sport, and here that theory proves no different. The Pacific Islanders hold a strong sevens culture and will hope to show their class once again this year.

Samurai Sevens: This invitational side feature many different nationalities and have a rich history in the game. They come to Thomond park for the first time ready to make an impression.

Canada Maple Leafs: Formerly ‘Vancouver Bears’, the Canadian side caused some huge upsets last season to reach the final before narrowly missing out to Devata. Whether things go as smoothly this time is yet to be seen but they’re certainly up to the challenge.

Golden Lions: Another side making their Limerick debut, the Lions have brought a strong roster which should have the potential to fight for the title. This team features Springbok star Mark Richards who won gold with his country at the 2013 & 2014 Commonwealth games.

The likes of Australia World Cup star Taqele Naiyaravaro made their mark on the tournament last season with huge effect. Sevens is an open game and individual excellence is easy to spot so it will be interesting to see who comes out with a name made for themselves in Limerick in 2015. For this reason we  have decided to list off the potential danger men for this year’s competition.

Young McCarthy was a schools sensation for Castletroy a few years back but decided to give rugby a break right up until his return for Young Munster this season. Upon return, the Munster winger has shown that he still has the huge ability to break through defenses with ease and is expected to be granted a senior contract sooner rather than later. This man’s power and pace is devastating and could leave a few fan’s mouths hanging wide open this weekend.

This man was voted as the player of the tournament on our Munster Haka Facebook page last summer after lighting up the occasion with his energy and eye for a try. White has appeared for the Canadian national team on a few occasions playing as a scrumhalf but it seems as though sevens was the perfect fit for  him as he chases the Olympic dream for Rio 2016. We are delighted to have him back in town!

The England Sevens star will captain the invitational side for the World Club Sevens. Brake played as a scrumhalf for Northampton Saints in his youth days but would eventually depart to peruse what would be a decorated seven-a-side career in the sport. Brake, standing at 5’9 is widely recognized for his sensational skill set and pace as he also hopes to star for his country in 2016’s Olympic Games. 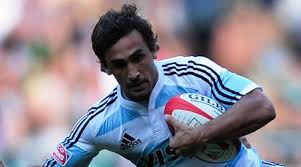 This Argentine is yet another scrumhalf who has excelled in the sevens world. Alcacer played for his country’s U20 side in 2008 before moving on to the sevens scene where he would star as their outside centre ever since 2011. The Buenos Aires star won 2 international caps for Argentina in 2009. This guy is definitely one to watch!

The South African star began his career with the Sharks in the 2010 Vodacom Cup. In 2011, he scored six tries in just six games in the same competition which saw him also earn a run in their Currie Cup side. In 2010 however, he left to concentrate on sevens with the national side which proved to be a decision which he will never look back on. Richards won two gold medals with the Springboks as he inspired a win at the World Games in 2013 and their Commonwealth Games success last year. Richards returned to fifteens rugby with the Golden Lions in the Currie Cup this season and has now been picked as captain as they show their hand in the sevens world.

Unfortunately there’s always going to be people who won’t be able to make this great event so we want to get you covered with some live updates from Thomond Park. Please vote to decide where you would like our updates to be posted online!