The World Cup is off with a bang and there has certainly been a wide range of fantastic performances over the last three days. This is our team of the weekend:

The Nottingham loosehead won no less than three scrums against the head when he packed down against Dan Cole on Friday night to everyone’s great surprise. Ayerza for Argentina was also fantastic in the Puma’s frontrow but the fact that Ma’afu offered so much solidarity to the Fijians in their usually inconsistent set-piece meant that they could really kick on and challenge the English.

Definitely worthy of the ‘best hooker in world’ argument after another outstanding performance in 2015. The Munster transfer target, lead from the front in all aspects of Argentina’s performance and showed his skill be providing near passes and offloads throughout the game.

Another member of the Argentine frontrow that obliterated the All Blacks in the first half of Sunday’s game. Under the challenge of the legendary loosehead Tony Woodcock, Chaparro shook off any challenge that the Blues veteran gave which provided a platform that saw his side bring the game to the Steve Hansen’s men.

The Japan second row was a menace in the tackle and was one of twenty three inspired Japanese players that managed to create the biggest upset in Rugby World Cup history by outclassing the Springboks in Brighton. Thompson in particular however, played perhaps the most crucial role of all as he stood up for the ‘Brave Blossoms’ and matched the South African physicality that they are so well renowned for.

Henderson was an animal in Ireland’s destruction of Canada in the Millennium and may have just made the number four jersey his own as a result. The dynamic Ulster forward was Ireland’s most abrasive carrier as he broke the first challenge more often that not and scrapped for everything in the ruck.

Leitch was another Japanese man who will go down in history as he stood up to be counted against the might Springboks. He was explosive in the carry and was a leader for the team throughout. 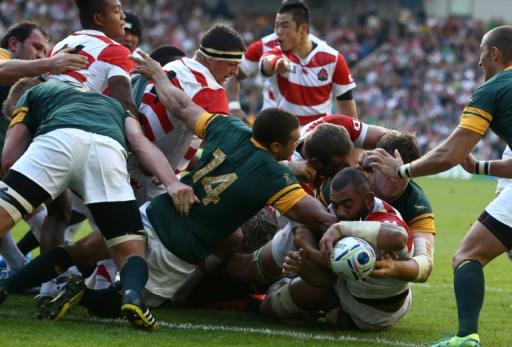 Godzilla showed why he is one of the most feared opponents in Europe by crashing Georgia to a tight win over pool rivals Tonga on Saturday. The Toulon man was devastating with ball in hand and scored a crucial try along the way.

Wasn’t the best weekend for the lads at the base of the scrum but Picamoles put in a good shift against Italy to justify selection. The Toulouse bruiser looks to have pushed himself back into Saint-Andre’s first team plans and performed to the level that you would expect.

Tanaka of Japan can count himself as quite unlucky as he played with great speed and determination for his side but Smith showed why he is the first choice scrumhalf for the Highlanders by showing his class and consistency in a scrappy New Zealand performance against the Pumas. Smith refused to allow himself to be dragged into a dog-fight on Sunday evening and kept control of his pack which allowed the All Blacks to regroup and eventually get the ball moving for the win during the second half as he scampered over for a game changing try.

This was exactly the performance that Sexton needed to get his World Cup off on the right note as he conducted Ireland’s play and found touch superbly time and time again. If he keeps this up, the Leinster ten could be one of the players of the tournament.

Anyone who watched Super Rugby this season will know that the Crusaders winger is an unstoppable force going forward and his level of performance proved to be no different on the international stage as he caused England numerous problems in Twickenham. Although his kicking wasn’t as accurate as usual, Nadolo showed why he has been compared to Jonah Lomu in recent times with a freakish run past five England defenders at one stage and also caught a cross-field kick with get confidence and strength to get Fiji a five pointer during the eighty minutes.

The experienced Argentine proved why he was rated 98 in Rugby World Cup 2011 as he threw a series of scrumptious offloads and set the defensive standard by meeting the All Blacks’ wave of attack well up on the gain line on a regular basis. A classy operator.

A hattrick for the Cardiff Blues youngster against Uruguay at the weekend gave Allen a dream start to the World Cup as he showed skill and pace much to impression of the media. Unfortunately, the man of the match was withdrawn through injury in the second half and will now miss the rest of the tournament.

Like number eight, the wings were surprisingly quiet in the first three days of Rugby World Cup 2015. Therefore we have taken the decision to mix things up a bit by putting impressive England fullback Mike Brown in at 14. The Harlequins star scored two tries on the opening night and was England’s primary attacking threat as he capitalized on poor Fijian clearances regularly to be crowned as man of the match.

Goromaru was key to Japan’s success by keeping them in contention with the boot and was also dangerous in attack. Like many of the Japanese side, the 29 year old could land himself a big club next season should they find consistency and reach the quarter-finals.