On a very dreary day in Rossbrien Castletroy faced a determined Clements side who wanted to make up for an embarrassing first round loss. The conditions were in their favour as the game was gonna be very much in the pack and Castletroy weren’t able to use their strong backline. The first few encounters of the game were very much even as neither side was able to break the deadlock. There were a few linebreaks for each side but no clear try scoring opportunities. This was until so fast play by Castletroy opened up an overlap and although they were taken down on the wing, a strong ruck from the Castletroy pack meant they were able to clear the whitewash in the corner (conversion missed). The half finished at 5-0 as neither side looked dominant.
The second half was a different story as Castletroy seemed to take control of the game. Some excellent kicking by Stephen Atkinson put huge pressure on the Clements defense and Castletroy’s forward piled into the ruck winning the ball back where prop Joey Conway scored to put Castletroy two scores in front (conversion missed). Castletroy’s third try came very quick after that as Castletroy put huge pressure on the fatigued Clement’s team. A great break from Dylan Reeves who off-loaded to Eoin Carew who finished off Clements with a score in the corner (conversion missed). The game became very slow after that with both sides looking very tired. The last real exciting play came late in the second half when Clement’s hooker Derry Gleeson made a break beating most of the Castletroy backline before clashing heads with Rory Hannon and both players having to come off injured. 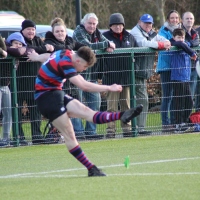