Off the back of a pretty poor effort against Connacht, Munster need to redeem themselves, and they need to do it pretty quickly. Business end of the season now folks, and there is no excuse for failure to reach the Champions Cup. I highly doubt that the incoming director of rugby  Rassie Erasmus wishes his first season overseeing the men in red to be even more of a rebuilding job than it already is. Alan Solomons’ Edinburgh sit one place above Munster in the Pro12 table on points difference, and have won three of their last five fixtures but their most recent away victory was against the lowly Dragons by a solitary point on March 27th.

Munster were a new level of poor against Connacht a fortnight ago. The simple 2-4-2 shape utilised by Pat Lam’s men (and many others including the mighty All Blacks) tore strips out of the Munster defence to turn a 14-6 lead into a 14-35 defeat. 29 unanswered points, let that sink in. I for the life of me cannot remember a Munster side being so comprehensively bullied and harassed that they were unable to register a score for almost an hour. Mr Erasmus has some serious work to do…

Three Leinster tries in 11 minutes blitzed Edinburgh at the RDS last time around. A second half that saw 44 points scored and a pretty even contest won by a single score. The Swashbuckling Scotsmen attacked with vigour through Limerickman Sean Kennedy and Tom Brown that night, both start against Munster.

In what many feel is his best position, Simon Zebo will have a major influence over proceedings this Friday night. Armed with an absolute siege gun of a boot, F1 style acceleration and no fear of direct running, he will look to profit from the inexperience of his opposite number Blair Kinghorn. Munsters record try scorer will want to keep adding to his tally and showcase himself as a a genuine contenders for a start in the green 15 of Ireland. 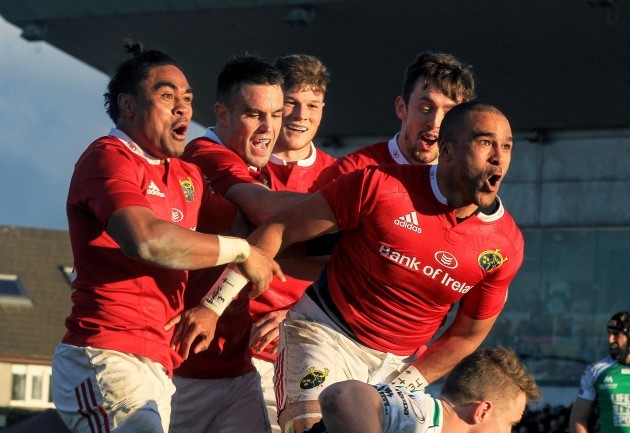 Conor Murray is currently the worlds best scrum half. There, I said it. Many will scoff, but Murray is archetypal modern 9. Basically an extra flanker with the passing skills of Agustin Pichot and a box kick that will hang over Irish Independent park like a safety flare. Murray has the size and strength, mixed with a sharp eye to cause any team problems from five or so meters out, be it with a quick flick pass or one of his trademark snipes over the whitewash.

One of a few proud Tipperary men to pull on the red jersey, Tommy O’Donnell treats every game like his back row compatriot CJ Stander, inflict as much pain and steal as much ball as possible. A candidate for the interim Munster captaincy at the start of this season, O’Donnell has practically painted the number 7 on his back the last couple of years. An excellent ruck and turnover operator he is nigh on impossible to shunt off the ball from the jackal position and works tirelessly to complete the most unglamorous of work.

If WP Nel doesn’t pull on a Lions jersey next year, I’ll eat his match worn jockstrap. The South African born thirteen cap Scotland international is just about the best tighthead in the Northern hemisphere, if not the world over. He has shored up a creaking Scottish scrum, forcing both Joe Marler and Rob Evans off just after half time this Six Nations just passed. Equally useful in the loose as a thundering ball carrier, we’ll leave him off for wearing those long sleeved compression shirts usually reserved for numbers 9-15.

Anton Bresler is possibly most famous for being the subject of a couple of insane one man lifts by a certain Tendai “Beast” Mtawarira whilst playing for Super Rugby’s Sharks in 2012. Bizarrely never capped by South Africa or his native Namibia, Bresler is an excellent lineout operator (usually in tandem with Mr Nel) and the sight of his flowing locks billowing out behind his head as he crashes the ball up the middle is one all too familiar for the Edinburgh faithful. Will likely lead the team out of the dressing rooms on his 50th Edinburgh appearance.

Surprisingly played just one Six Nations game for Scotland this season, Matt Scott should rightly feel aggrieved. A typical modern centre possessing great hands and a frightening turn of pace, in addition to tremendous strength in the carry and the tackle. Scott will run a lot of crash ball down the 10 channel, where his size and strength may well power through Jonny Holland.

The last time the two sides met was in November. On that particularly gloomy evening Munster won 14-16 thanks to a CJ Stander blockdown at the death from Sam Higaldo Clyne’s drop goal but the truth is that that performance was far from good enough then, and after a significant kick to the home side’s confidence in recent months the task will be even tougher this time.

In Murrayfield Munster controlled all the ball but just two things caused them trouble: baffling refereeing from David Wilkinson who showed 3 cards on the night and the scrum.

If I was the Edinburgh coach I can honestly say that i’d be instructing my players to knock on when in midfield. You see, the capital club’s greatest asset is their front row, the inernational starting trio of Allasdair Dickinson, Ross Ford and WP Nel (a combination who caused havoc even in the Six Nations) and Munster’s tight five, let alone frontrow is for sure the weakest area of the team. The last day they met, Edinburgh caused absolute carnage to John Ryan and Dave Kilcoyne and this time Foley has decided to just swap in the returning Stephen Archer for Ryan. One can only hope that penalties are kept to a minimum and that Scannell can get it out as soon as possible each time. Our faith is in Archie.

Both teams need a victory to keep slim hopes of a play-off place alive. Both teams need a win to keep not quite as slim hopes of a Champions Cup berth alive. All 8,500 tickets have been sold at Irish Independent Park, a capacity crowd roaring on Munster for probably the first time this season. The atmosphere at Thomond has been rather flat this season, no need to guess why. Maybe the novelty of playing in Cork for a change will spur on a victory in this do-or-die encounter!