Ronan Calvert reports from the University of Limerick

St Munchin’s have booked their spot in the Junior Cup quarter finals following a convincing win over Glenstal on Thursday afternoon.

Right from the off, Munchin’s underlined their intentions. The Corbally schoolboys carried forward with purpose before passing the ball through the hands for the first time and finding outhalf Craig Carew in space to score.

The try was a sign of things to come but Glenstal’s Taylor Gleeson kept Munchin’s honest by knocking over a penalty minutes later to make it 5-3 – as it remained for a fair portion of the first half.

However, Munchin’s would find joy by going wide once again before the first 35 passed. Josh Campbell this time the try scorer.  Munchins 10-3 Glenstal at the break.

At the restart, Glenstal carried their late first half pressure into the second. The Murroe men mauled into Munchin’s territory, challenged the defence and eventually crossed the line, only to be held up by a gallant piece of defence from Munchin’s. In the aftermath of the attack, players from both sides dropped with injuries, allowing Munchin’s to regroup as any Glenstal momentum was lost.  A mental blow for the trailing side.

In contrast, Munchin’s made their time in possession count. With just ten minutes left to play, Craig Carew made a superb break before finding outside centre Keith McInerney with an offload. McInerney did the necessary and darted into the corner to put the score beyond doubt. 15-3.

Five minutes on and Munchin’s put the icing on the cake. A scrum was called deep into Glenstal’s 22 following a barging carry from replacement Craig Finn, his fellow forwards drove over the ball and a pass or two later Ewan O’Brien found his way under the sticks, to cap off an all-round excellent performance. 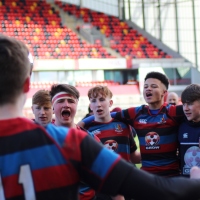