Well the Cirque du Six Nations is over for another year, Ireland ending another potential world record winning streak (Thank Christ), back to matters less pressing now. Thanks to a typical Thomond Park demolition job on a pretty disinterested Toulouse, a European Semi Final looms in a fortnight. Glasgow are probably the ideal preparation for the aforementioned continental dust up with reigning champs Saracens. Bruising Rent-A-Springbok Jean Deysel makes his Munster bow from the off in his preferred 6 jumper alongside exciting academy player Conor Oliver & the ever improving Jack O’Donoghue, fine balance to that particular area of the field. If rumours and reports are to be believed, this is likely the last time Donnacha Ryan will grace the Irish Independent park turf and I can foresee a rapturous reception for the Tipp man when he emerges from the replacements bench.

Glasgow could well have been Munster’s Champions Cup opponents in the last four had they not been so easily brushed aside by a Saracens team who barely looked like they got out of third gear. With a Pro12 semi final pretty much at stake for the Warriors, it’s win or bust in Cork. A defeat would leave them 12 points off fourth place with just three games remaining, though with two of those being against Zebre and Edinburgh, all hope may not necessarily need to be abandoned yet. Finn Russell & Johnny Gray will look to carry over their outstanding Six Nations form to Saturdays fixture, while the outstanding Stuart Hogg has pretty much cemented his place in the Lions 15 jersey. The two sides have met three times this season in all tournaments, with Munster victorious on each occasion.

Though nothing has been officially announced from either club, Donnacha Ryan appears to be all set for a move to Racing 92, and all the best to him. I hope for Ireland’s sake the “Sexton/Bowe Rule” will be enforced so he can still contribute in the green jersey like he has done so massively in the last couple of seasons. But for now his immense leadership, brute strength, sublime lineout work, bullish tackling, thunderous carrying, intense staredowns & constant snarling will have to be cherished by the Munster faithful for the half dozen or so games he has left with the province. Admittedly after re-reading the above, I can only conclude the man is a bit cracked, but you’d have to be to willingly stick your head next to a front rowers arse. Racing are signing one hell of a player, and they know it.

A strikers dream stat is usually acknowledged as a goal every other game, 2016/17 PRO12 top scorer Ronan O’Mahony’s haul of 9 tries in 17 games just about beats that and with four regular season games remaining he must be odds on to hit double figures. O’Mahony has made good on his chances this seasons with messrs Earls, Zebo & Conway donning the green jersey over the course of this PRO12 campaign. Tremendous pace and obviously an eye for the goal line, O Mahony may yet sneak his way onto the summer tour to Japan. 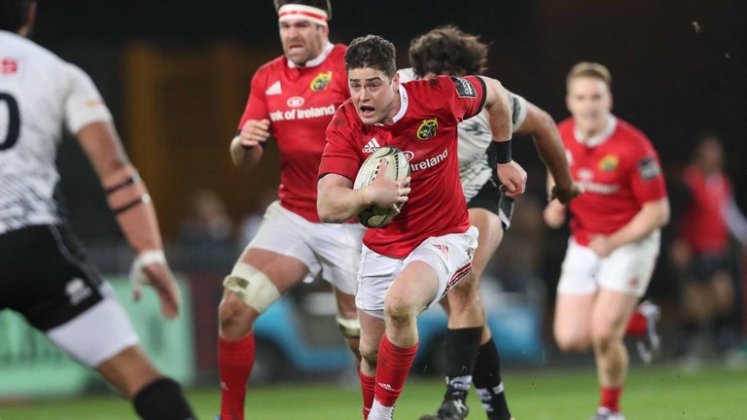 Deservedly voted Six Nations player of the year for the second year running, Stuart Hogg is probably only behind Ben Smith in a World XV in the 15 jersey. Absolutely blinding pace, a great eye for a gap and well capable of slotting goals if needs be, Hogg is probably Scotland’s first genuine world class player since the great Gavin Hastings, coincidentally also a fullback. Yes we all remember his theatrics during the most recent World Cup & there may also be a touch of Mike Brown’s “I’ll shove you because I’ve two flankers to back me up” syndrome but one cannot deny his ability. Fifty three Scotland caps, 90 in total for Glasgow and the youngest Lion since there were laces on the ball, AND he’s only 24…

Finn Russell will likely be on the Lions plane as one of three outhalves this summer, I can’t disagree with that. Controlled Scotland’s victory over Ireland with such class and precision that his Lions colleagues Farrell and Sexton would be proud of. He has only made six PRO12 appearances this term, but 65 points from those half dozen outings isn’t exactly dusty. Probably one of the best distributors of the ball from the stand-off position in world rugby, Russell is an absolute genius when it comes to setting his backline on their merry way up the pitch.

As previously mentioned, Glasgow are 0-3 vs the men in red this season & their only previous victory in Cork was 21-18 in May 2008. They are an excellent well drilled side and won this competition just two seasons ago, but Munster are riding the crest of a wave hopefully all the way to the Aviva & Murrayfield come what May