Wet and windy conditions cleared before kick-off, leaving a ray of sunshine lighting up the newly-laid Thomond Park surface. Conditions that perhaps seemed better suited to the offload-happy Cheetahs, but it didn’t quite turn out that way.

Munster took the initiate early on with some truly energetic and meaningful defence forcing the Cheetahs in the wrong direction, and it wasn’t look until they began to offer likewise on attack.

Wingers Darren Sweetnam and Alex Wooton shone the brightest of the backs, but it was early try-scorer Tommy O’Donnell and Jack O’Donoghue that punched the biggest holes in the Cheetahs’ defence. Indeed, after just 10 minutes, the scoreboard would read 10-0 thanks to the aforementioned O’Donnell and the boot of his outhalf Ian Keatley.

Some minutes later, Alex Wooton’s good work was too awarded as the Garryowen speedster darted down his wing to add five and allow the prolific Keatley to add the extras.

Early exchanges certainly suggested there was a gulf in class between the two sides as Munster took control in most facets of play. However, the Cheetahs would manage to keep their side of the scoreboard ticking over with two penalties in quick succession to make it 17-6 before the half hour.

Unfortunately for the visitors, they were soon to be virtually out of sight as Andrew Conway put away Alex Wooton in the corner for his second try of the afternoon. Keatley failed to convert in an otherwise excellent first half performance from the number ten.

Munster’s dominance may have momentarily caused some complacency to set in as immediately after the break Cheetahs’ inside centre William Small-Smith was allowed space to break and made no mistake in finishing as he out-sprinted Munster’s back three before crossing the whitewash. The Cheetahs’ tails were up.

But not for long. Munster’s dominance began to show as powerhouses Jean Kleyn and Chris Farrell scored in quick succession to bring the scoreboard to an emphatic 34-11 on 50 minutes. Kleyn bagged his third try in two games by crashing over in typical fashion, while Farrell showed off his quick feet and acceleration to gallop over.

Not long later, Alex Wooton bagged a much deserved third, then forth! The winger had far too much pace down his left flank all day and may have just caused Rassie Erasmus another headache for when it comes to Champions Cup wing selection next month.

If that wasn’t enough, Erasmus’ next move was the empty his international-filled bench. Niall Scannell, Dave Kilcoyne, John Ryan, Rory Scannell and Simon Zebo all came on looking to cause carnage as Wooton in particular walked off to a rousing reception.

And Zebo did just that. Munster’s forwards rumbled into good position, James Hart drilled through a clever kick and the Corkman did well to get his finger-tips to the ball ahead of his opposite number. Keatley missed for not the first time in the second half but Munster had reached the half century.

The Cheetahs had the final say as Henco Venter forced his way over, but in the end this was little more than a handy run around for the utterly dominant Munster. 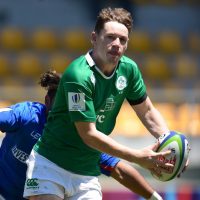