The champions were in town this evening as Munster looked to put last year’s struggles against Wayne Pivac’s men behind them, and in more pressing matters, put a halt to a recent spell of inconsistency that has seen defeats to both Cardiff and Edinburgh.

The men in red’s confidence needed a boost in advance of next weekend’s titanic clash with three time European Cup winners Toulon and overcoming a side of Scarlets’ quality at the same venue would certainly provide just that.

Though that of course was never to be a simple task.

The Welsh arrived at Thomond Park with a team sprinkled with international quality. Among them Six Nations stars Rhys Patchell, Steff Evans, Samson Lee, Aaron Shingler and Scott Williams, but not least the Munster-bound, EPCR Player of The Year nominee Tadhg Beirne. With a remarkable thirty six turnovers in the league this season to match his superb carrying and play-making qualities, the Kildare man has made all the headlines and is sure to become a fan favourite in these parts in the near future.

Ireland’s Grand Slam heroics were made a whole lot more possible because of the IRFU’s player management system and that policy was again in action this week with just two internationals returning to the Munster fold – John Ryan and Ian Keatley. As a result, head coach Johann Van Graan was required to reshuffle an already injury-hit side for today’s game, but in the end this Munster team’s strength in depth came to the fore in an excellent display at Thomond Park. 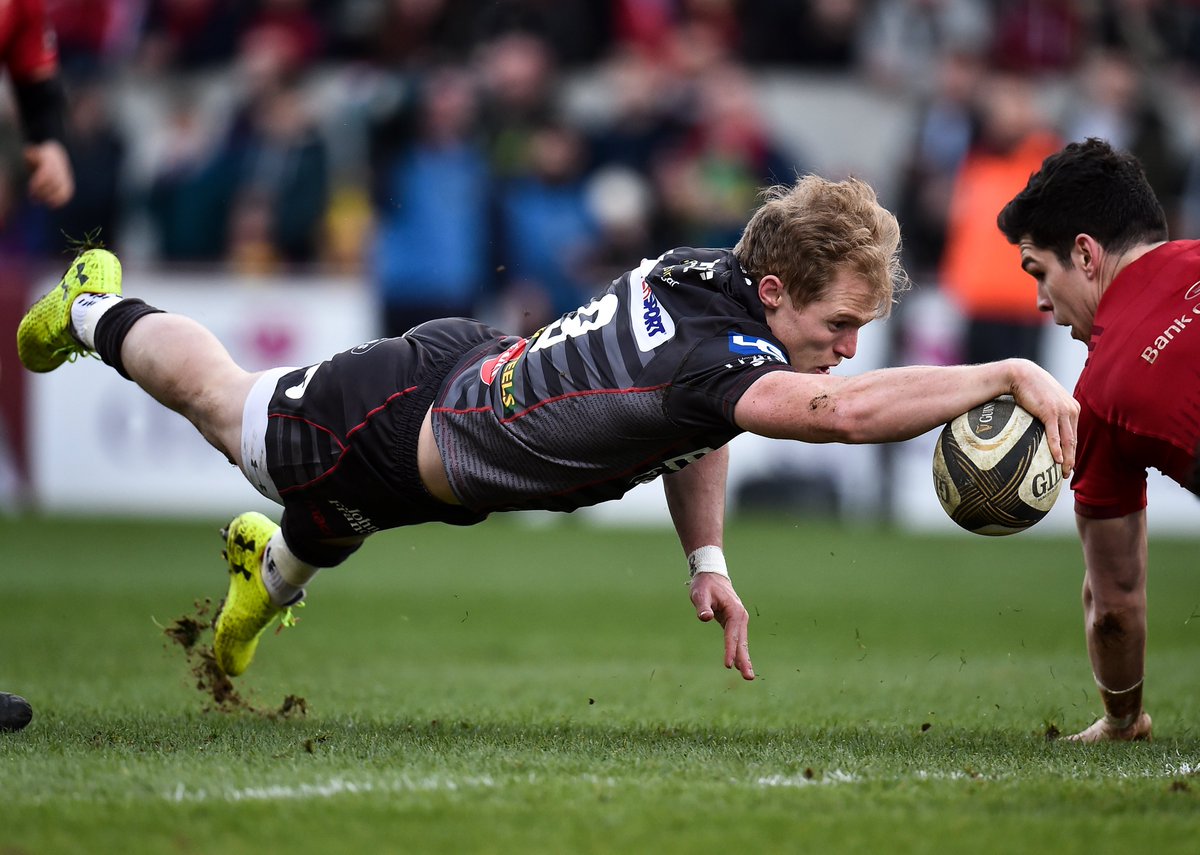 Scarlets expressed their usual attacking brilliance under the glorious evening sunshine early on as Munster showed desperation in their attempts to weather the Welsh storm. Patchell put on an exhibition of long-range passing, Evans stepped one or two and it wasn’t long before Scarlets manufactured a line break. Some superb handling by the forwards left Munster seeing flashbacks of last season’s PRO12 final and at the end of some classy play scrumhalf Aled Davies stretched over to score. Patchell converted to make it 7-0 after just ten minutes.

The weather was suiting Scarlets and Van Graan’s men needed to come up with a response.

After twenty minutes, although against the run of play, it looked like Alex Wootton had done just that. Wootton came up to tackle an opponent inside his own twenty two when the ball spilled out and the winger ran from end to end, appearing to have leveled the scoring. Unfortunately from a Munster point of view, the referee called the play back for a Scarlets scrum following a knock-on in the tackle.

In truth, a scoreline of 7-7 would have been very generous on the hosts following the opening quarter, but from that moment on Munster began to win the battle up front.

The return of John Ryan to the front row meant this evening’s scrum penalty count was strongly in Munster’s favour and the men in red used that platform to good effect. From one particular penalty Ian Keatley found touch, the pack rumbled forward and in what was Munster’s first real attack, James Hart sniped right and burrowed over for the try. Keatley failed to convert, leaving the score at 7-5.

The first half may have started with fireworks but by the break proceedings had began to settle down and eventually James Hart knocked the ball out of play to head for the dressing rooms just two points behind. 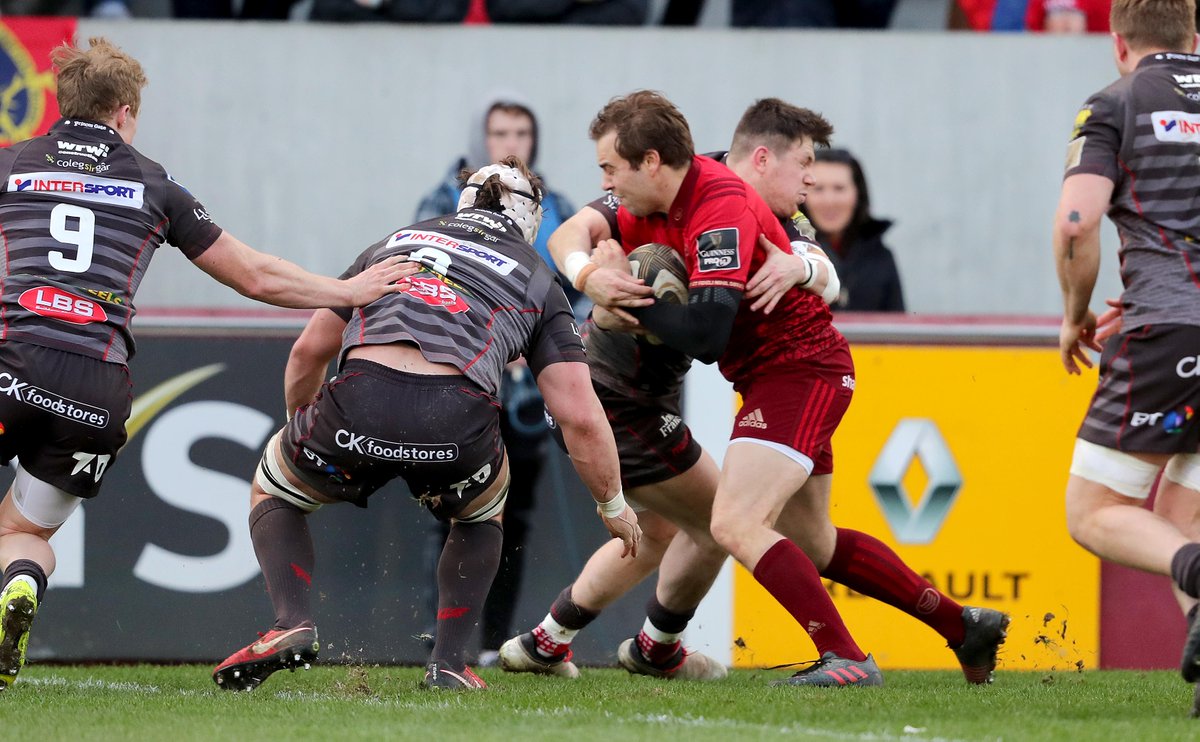 The opening five minutes of the second half summed up the previous forty perfectly. Scarlets threw around the ball looking dangerous at first, but once Munster had their own possession they made sure to make the most of it. Munster’s forwards again proved too powerful for Scarlets to handle and after a number of surging runs, number eight Robin Copeland was the man to give Munster the lead. This time Keatley added the extras, leaving Munster sitting pretty at 12-7.

That try seemed to take the wind out of the Welsh side’s sails somewhat and Munster could have been in an even more commanding position had a couple of refereeing decisions from Marius Mitrea worked in their favour. An unpenalized trip on Sam Arnold and a couple of shoulder-height contacts from Scarlets defenders sparked a considerable reaction from the terraces, but the fifteen men on the field didn’t leave that affect them.

If anything it spurred them on further. Van Graan’s men were Scarlets-like in the build to their third ‘try’. Niall Scannell made a half-break through the middle, he offloaded to Dave O’Callaghan who in turn found James Hart on the surge. The 26 year old scrumhalf was pulled down just shy of the try line but his forwards pack were there to offer a helping hand. After some typically effective ball-carrying, James Cronin crossed the whitewash to again, only seemingly, extend Munster’s advantage.

That’s right, public enemy number one Marius Mitrea decided to have a second look and the Italian referee ruled that Cronin had made a double movement before touching down, keeping it as a one score game. Go figure.

So in order to be safe, Munster had to try and score again. JJ Hanrahan really grew into the game as time went on and the Kerryman beat a couple of defenders to work his side into the opposition’s twenty two with five minutes remaining. After a couple of phases Munster decided to go wide and in the end it was Stephen Fitzgerald’s skip pass that found Alex Wootton in space on the left wing. After yet another TMO review, the try was this time awarded and Keatley converted well.

This was a crucial league result and one that Munster will look back on with a lot of satisfaction once the bodies recover…and of course, once we overcome Toulon at the same venue in a week’s time!