Both the Junior and Senior Cup are good but not great if we’re honest with ourselves. The supporters rate their sides on the chanting pitchside and the result. Nothing else matters.

In this article we hope to put forward a solution to improve the entertainment values of the competitions and further improve the already existent values that make it all so special in the first place.

For the first time, 2016 saw an expansion of the competition from 8 to 10 schools. Bandon had finally been recognized as the ninth ‘A’ school while St Clements took part as a result of the successful B school qualification system.

This new format meant that there was a ‘first round’. Five games were played and there were of course five winners filling most of the quarter final spots. 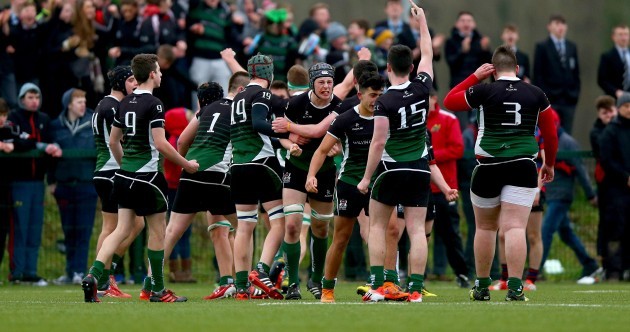 That left three more spots and therefore one of the five losers was drawn out of a hat to be the sixth quarter finalist. This subsequently left a qualifying round of four losers, rewarding the victor of both games that make up the final two spots in the QF.

The first round fixtures, like every other game, rarely brought a smile to your face with running rugby though. In fact, it is unlikely that although schools rugby is unique, craic for entire school organizations and brutally competitive, that an encounter will ever impress you quality-wise.

Well for a start, there is one glaring way to address this, for the first round at least.

First round, five advance to take up all but three of the Quarter Final spots. Perfect. On the subject of the sixth team though; out of a hat?

Seems a bit silly doesn’t it?

Why not introduce a rule whereby the losing team of the first round who scored the most points advances to the quarters as a wildcard?

This ruling would be a fierce encouragement for all participants in the first round to go out looking to adventure and attack. The days of coaches telling you ‘the Junior Cup is all about getting the basics right’ for example, need to be scrapped. The reality is already that the team which does more than perfecting their lineout, is the team that go onto the final. However, to push the rest of the schools from clashes of conservative sides into what resembles Super Rugby more so than ‘Robot Wars’ is crucial.
Not only would this change obviously alter the nature of the first round, but as teams build towards such a game for the chunk of 12 months, training varies too. In the knowing that scoring points is the difference between going onto a quarter final and adding the obstacle of another fixture to your calendar, training suddenly becomes orientated around attack, accuracy and skills in the lengthly lead up.