The rain is coming in sideways and so cold I spotted one man pour tea on his feet at half time.

We forever expected glamour games in those days as the Munster pot simmered away just waiting for the moment the gas would be turned up.

Just not on this particular night. Only for the wind and rain, the crowd would have drifted off within 20 minutes of rugby. The long drive home to Cork had an air of disappointment to say the least.

But deep down, as Big Jim would say. “Good times a comin” and we all knew it.

We as supporters now find ourselves in a similar position. This air of disappointment sweeps over the city on an all too regular basis. Can someone turn the gas up a notch?

No, is the quite blunt but honest answer.

Axel drives a bus with 3 punctured wheels and no spares in the boot. There is no money for diesel and everyone on the bus seems happy to go along for the ride.

As they enter the tunnel, it seems the light may never be seen on the other side.

Am I being harsh? Doubtful. I have a heart the size of Ireland for Munster Rugby and it will continue to beat until my dying breath.

Where does the solution lie?

I just feel a strong analysis of where we are is needed sooner rather than later before the engine on the bus explodes.

We headed into a Pro 12 game against Zebre in Thomond Park at the weekend with nobody knowing what to expect. A narrow four-point win over the same opposition in January is put deep down in the memory box and talk returns to the “Bonus point” conversation. (And not the losing one obviously)

The return of the internationals should ensured this game was nothing but a matter of showing up but despite the results during this seasons run in, the scars run deep and still need addressing.

I personally would feel Axel was never the man for the role. Expectations are high in this part of the world and an experienced coach would have been the wiser choice.

The big issue now is the cold October nights do little to entice these big coaches/players and the shine seems to have dulled somewhat on the old Munster Juggernaut. Vern Cotter is the perfect man for the role but let’s call a spade a spade, a truly unrealistic prospect.

The foundations are in place to rekindle the spirit in this squad but without an experienced conductor, things look bleak.

Firstly, we need to up the concentration levels on Youth development and introduce younger homegrown stars to match day. We need to look closer to home again and it is a large home that surely yields more talent than has been sourced recently.

Next is addressing the gap between International level and club level. A simple example is the long distance between Conor Murray and Duncan Williams. Williams for me does not have the quality or skills to control any aspect of a rugby game hence the reason for a slide in results during international breaks. He has eliminated his two steps prior to his pass but the difference in quality will forever be evident. 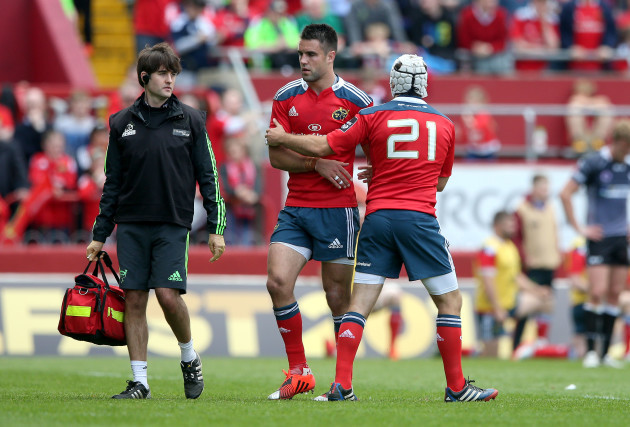 Next would be an entire review of the whole situation. Many have suggested this but what comes to mind for me is an episode of Ramsey’s Kitchen Nightmares. I feel an outsider’s opinions might help remove the blinkers from the board and wake up to the fact that their province is losing blood at an alarming rate.

Finally, Munster needs to get the fans back. Results put bums in seats and these bums create the fortress that our proud stadium once was. Fear is a powerful tool in the game of rugby but a trip to Thomond does not seem as daunting for the opposition of late.

The most important part of this solution is time and action.