‘Player Profile’ is the name that we’ve stuck to player analysis pieces that feature up and coming youngsters playing for Munster.

Unfortunately, with the exception of Jack O’Donoghue, our player profiles have been a kiss of death to every single player that has featured up until this season, with Brian Haugh, Luke O’Dea, Darren Moroney and Paddy Butler among those to be released from the Munster set up within the same year as our articles. However, we’ve decided to make a return with the profile pieces anyway due to popular demand – so hopefully that trend comes to an end!

Indeed, this season we wrote up on John Madigan, Bill Johnston and Rory Scannell and it is fair to say that they have certainly lived up to the hype!

Ben Betts has been a promising candidate of the Munster academy for the last couple of seasons and his robust performances in his provincial red deservedly earned him a place in Nigel Carolan’s squad for the U20 World Championship this Summer.

Munster fans have been waiting for a quality homegrown tighthead since the retirement of John Hayes and were hence rather excited to see what young Betts had to offer. His first high profile contribution has been in the U20 World Championship.

However, from the get-go it looked as though Betts wasn’t going to be as prominent a team member as hoped as Conor Kenny started the opening match of the tournament versus Wales. Fortunately for the Cookie’s prop his competitor was withdrawn with injury just three minutes in and then, even though Betts never even made the Six Nations squad, he was now set to take the reigns in the frontrow on the world stage.

The future of the tighthead prop position in Irish rugby has been in the dark for what seems like an eternity. Many modern number three’s can be strong with ball in hand (something we will analyse later) but the primary role is of course to bring stability to the scrum – though Betts has sometimes even done more that.

The match which we will be showing examples from is against the World Champions New Zealand.

In the first instance displayed below, Ireland feed the scrum five metres out from the Kiwi line and Betts powers his way through the struggling opposition loosehead.

Betts can be seen backing his strength with a moderately high bind on Ayden Johnstone (#1). The Munster man here implements a long bind gripping the bottom of Johnstone’s shirt before engaging into him and angling the highly rated Waikato man outwards.

To take on this technique, Betts displays confidence in his conditioning and power to out-muscle his opposite scrummager.

The drive is aided by Andrew Porter’s contribution on the loosehead side for Ireland which unsettles the far side of the black scrum before Betts does excellently to add insult to injury. Ben captilizes on the imbalance as he had already lined up Johnstone to a position where he is upright and facing inwards at a 90 degree angle. This preparation therefore enables the Munster man to barge through his opposite scrummager leaving him on his backside facing the touchline.

In the next scrum shown, Betts’ strength is again under neon lights. He puts his feet well behind him and makes the All Black frontrow ride a wave or two of pressure before both props collapse to the ground under the formidable force of Betts and Porter.

When on New Zealand ball meanwhile,  their pack were aware of such a threat and made sure to get the ball in and out as soon as possible.

All of this, before even mentioning the absolute destruction which he caused Argentina in today’s (20/6/16) world cup semi-final.

You can never judge a tighthead purely on what they offer around the park and that’s exactly why we have provided proof of Betts’ scrummaging ability against the world’s elite. On viewing of this, it could be said that Betts is a capable performer for his level and that he does his job in a solid fashion. Importantly however, he has more than one string on his bow with his carrying also having potential to be immense.

In the GIF above, Betts shows presence of mind to identify a gap in the opposing defence and runs a lovely line to take his team far beyond the gain-line. Due to the run which he chooses, Ben doesn’t show his brute strength here but instead we see outstanding pace for a number three. With a short run up, the Cookie builds momentum to split the opposition in two and if he could make this a regular occurrence he could well become vital for Munster Rugby.

Another great instance of his ball carrying is shown here as he busts through the Ospreys development side. Not only does he show physical attributes but once the defender grabs a hold of his jersey he continues to march on with a whiff of Peter Clohessy-like desire.

By continuing this form with Munster A, perhaps Munster management will contemplate gambling on utilising Archer, Andress, possibly Ryan and Betts next season as tightheads. Or even better, converting Ryan back to loosehead permanently, perhaps signing a new prop, whilst also accommodating the new star on the block in the 15.

And yes, he can also do this:

The final quality of one of the most well rounded young props you will find these days, happens to be defensive rucking.

The clip below shows Betts in action for Young Munster in which he jackals over the ball against Cork Con.

Betts for such a big man is always close to the play and his tireless work-rate pays dividends in this situation. Just as his teammate makes a strong textbook tackle, the tighthead is on hand and enters the point of contact from his own side before locking onto the ball. He applies a wide platform with his legs, keeps his upper body as low as possible and thus becomes immovable for the Cork Constitution pack.

Further backing of this point comes as Betts is shown latching onto Connacht possession at A level above.

With so many lethal qualities in his arsenal, Munster fans certainly have a whole host of reasons to be filled with anticipation for this young man’s development.

It has been a long, long time since such a promising tighthead prop has shot up through the Munster model. With the lack of tighthead options available in Irish rugby it is inevitable that Betts will be granted opportunities in the Munster side sooner rather than later and based on the evidence we’ve already seen, he could very well make a mark. 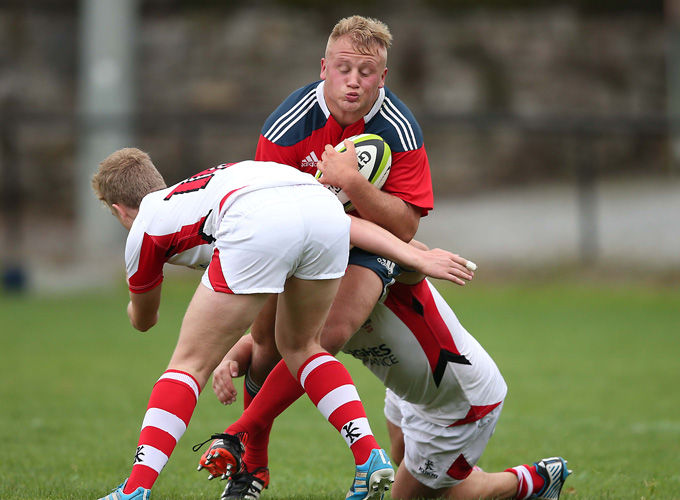 If not, then it could be the biggest mistake Munster have made in quite a while. When you see such potential you would hope that Rassie Erasmus, a man renowned for his development of youngsters, will give Betts sufficient opportunities during his initial three year stint as director rugby.

Put simply, if Munster and Betts alike don’t treat this enormous potential to their best abilities then the province could go on to wait another decade for a viable Champions Cup tighthead prop forward.

Ben Betts, good luck with everything from all at Munster Haka.