The men in red served up a pretty decent St Stephen’s day dinner for us a few days ago, making Leinster look like a bunch of headless turkeys (gettit?). New Years Eve brings an away trip to Galway to face a Connacht team with over twenty players on the injury list, most notably Bundee Aki, John Muldon & Ultan Dillane. The cupboard is so bare in the front row that poor John Andress hasn’t even been allowed to retire in peace, ironic indeed that he may make his PRO12 debut against his old employers this Saturday.

The IRFU’s player management program strikes again to rest Simon Zebo & CJ Stander for this fixture, while Rassie rings the changes himself, most notably the ever impressive Jaco Taute swaps with Francis Saili from starting XV to bench. Munster have had a perfect record at Thomond Park in 2016 across all competitions, but away form has been a little patchy at times. The last meeting at the Sportsground went 35-14 in favour of the Green Army on their way to last seasons monumental PRO12 campaign, however this season both teams fortunes could not be more contrasting. Munster sit atop the table thanks to their St Stephens day triumph, whilst the defending champions sit closer to the foot of the standings than the top, old habits eh?

Kiwi international Francis Saili makes his first start this season, bizarrely relegating his (temporary) replacement Jaco Taute to the bench and boy does he need to get back up to speed quickly. On his day, Saili is as capable a line breaker as Ulster’s Charles Piutau and as good a finisher as his counterparts Zebo & Earls. Now with Taute signing an extension to his deal until May, he and Saili are in pretty much direct competition for the rest of the season as to who will be retained (if either of them are). 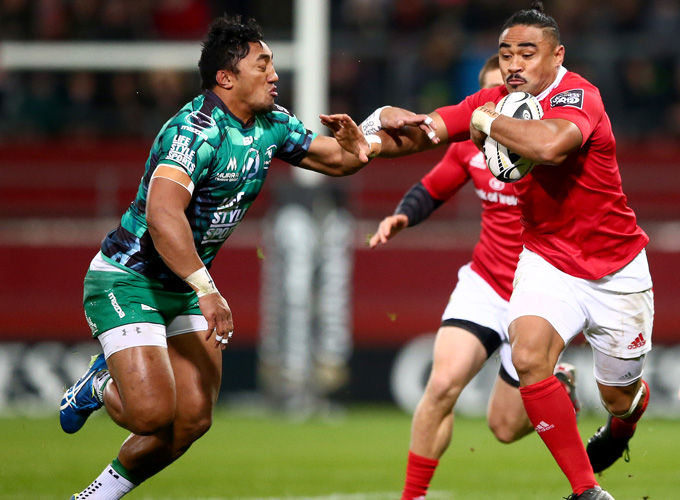 Third in the tackle charts, interim Munster captain and his Irish debut all in the last few months for Billy Holland, not exactly poor lets be honest. A long time coming for the 32 year old, but deserving nonetheless. A model of consistency over the last 10 or so seasons, this weekend sees Holland’s incredible versatility on show as he captains the men in red from blindside flanker.

878 meters gained this season, that’s an average of about 80 per game for Connacht’s flying fullback Tiernan O’Halloran. When Rob Kearney was installed as Ireland’s first choice 15 prior to the November Internationals, O’Halloran may have felt hard done by. However a brace of tries against Canada will have to do until the Six Nations. Blessed with blinding pace and an uncanny knack of almost always running a superb line, O’Halloran is indispensable to the Westerners and is a shining light in an otherwise dull season.

But for the brilliance and raw power of a certain young Leinster tight-head, Finlay Bealham would surely have the Irish 3 jersey marked as his own for the immediate future. The Australian born 25 year old only made his provincial bow in 2014, was switched from loose to tight-head midway through 2015 & yet barely two years later he is a fixture in the Ireland matchday 23 and a cornerstone of Connacht’s PRO12 success last season, he featured in every single one of their combined 31 domestic & European matches. Battling the likes of Ronan Loughney & Dennis Buckley week in week out & with two seasons of playing & mentoring experience from Nathan White & Rodney Ah You, The only way is up for Finlay

The final pro 12 fixture of the year for both sides could not be more important for vastly differing reasons. Munster to consolidate their position at the top of the standings, Connacht to avoid matching their Premier League counterparts Leicester City in making a poor defence of their previous seasons triumph. Twenty plus players injured is no easy feat to overcome, even in the Wild West.