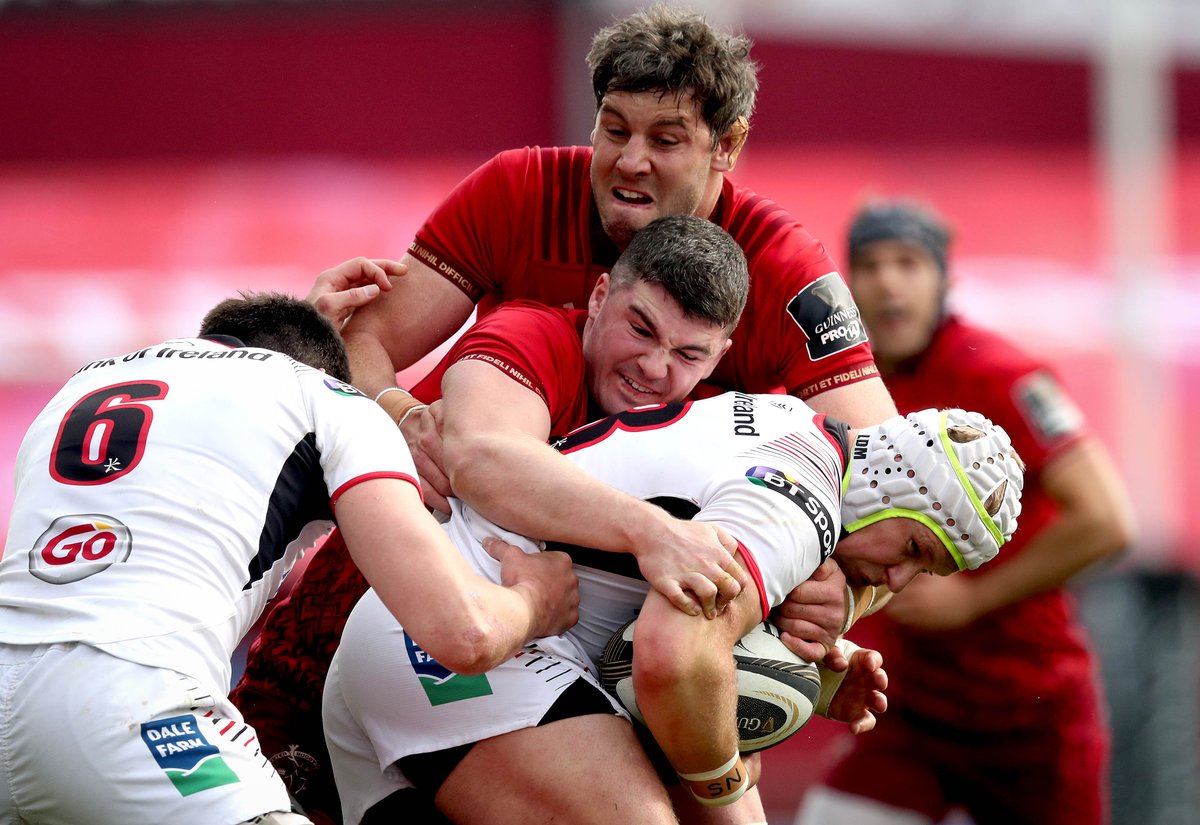 After a hectic month of dramatic highs and lows, this evening’s match was never quite expected to capture Munster supporter’s imaginations to the same extent. Off the back of the rather deflating semi-final defeat in Bordeaux last weekend and with second place in Conference A already secured in the Guinness PRO14 – although an interpro, this in truth was a fixture for the most dedicated of us. A nonetheless decent crowd made the effort to get out to Thomond Park as 16,178 interested sets of eyes took the opportunity to hopefully watch fringe players strut their stuff, enjoy a response to last weekend and most of all, celebrate the return of Mike Sherry to the first team. The twenty-nine year old has gone from hell and back with injury torment over recent seasons but tonight he captained the men in red on his hundredth cap in what is a true testament to one of Munster’s finest stalwarts.

By contrast, Ulster were on a mission. Having endured a nightmare campaign, Jonno Gibbs’ men arrived in Limerick fully-loaded with Grand Slam-winning ammunition.  Rory Best, Iain Henderson and the sensational Jacob Stockdale the stand-out names in what was essentially a first choice Ulster side. They needed a bonus-point win to keep their play-offs hopes alive and that left Munster’s young guns with a mighty task in hand.

Within minute they proved to be up to the task. JJ Hanrahan drilled a kick into the corner, Ulster scrumhalf David Shanahan got caught in possession from the resulting breakdown and Duncan Williams pounced to score. Hanrahan converted making it 7-0, leaving the decent Ulster travelling support fearing for the worst early doors.

Though it wasn’t long until the visitors were back on level terms. A mix-up in the Munster midfield left Ulster’s ever-threatening backline sniffing blood and in the end it was danger man Jacob Stockdale who bolted through before finding Stuart McCloskey on his inside shoulder. Set free, the twenty-five year old galloped clear to dot down for five points. If not the perfect start for either team, it was certainly an entertaining one. 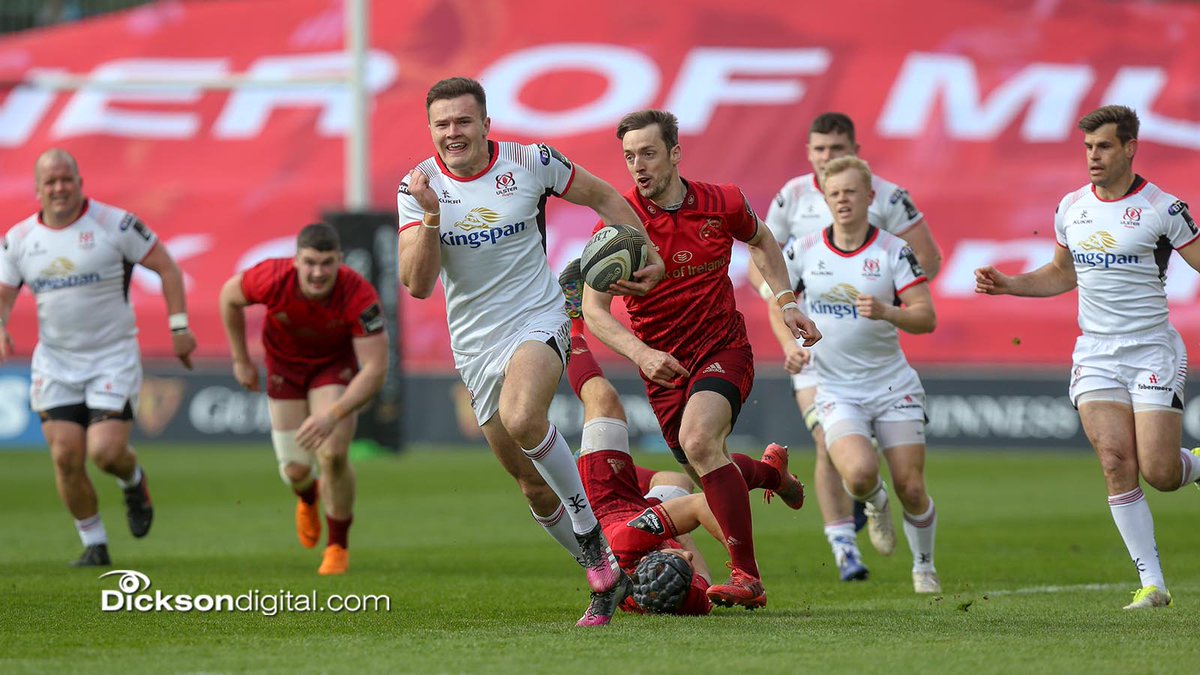 Ulster looked to be showing their experience for the first half an hour as they added a Johnny McPhillip’s penalty and enjoyed long spells of possession in the Munster half. That changed on twenty minutes when Darren Sweetnam attacked the ball with pace, beat a couple of defenders with Andrew Conway-like magic and brought Munster within firing range. The forwards took control from there with the impressive James Cronin heavily involved in the build up and after four phases Cronin’s fellow prop Brian Scott barreled over for the try. Hanrahan converted making it 14-10.

But a pattern emerged. Within minutes Ulster got down to the Munster twenty two, mauled Munster into conceding a penalty or two and eventually made their way over through captain Rory Best. Munster were not just left trailing, but also without Robin Copeland for the following ten minutes. Munster 14-17 Ulster.

And the numerical advantage was made count. Munster struggled to see out the half with fourteen men and again Rory Best crashed over to leave the half time score at Munster 14-24 Ulster. Room for improvement.

Munster returned to the field with a ferocity about their play – or initially, at least. Crunching tackle after crunching tackle forced Ulster into an early mistake inside their own twenty-two and Munster, further boosted by the return of Robin Copeland, packed down for the scrum. However, the same inaccuracies and handling errors crept in once more and it wasn’t long before possession was coughed up into Ulster hands. Something needed to change and head coach Johann Graan hoped the introduction of Stephen Archer, Jean Kleyn and Jack O’Donoghue on forty five minutes would add just the firepower needed.

And that it did. Munster’s forwards almost immediately took the upper hand and kept Ulster under the cosh for the following five minutes. First it looked like James Cronin had scored but for a knock-on and then just a minute later Robin Copeland showed how he will be missed when crashing over to swing momentum right back in Munster’s favour. The confident JJ Hanrahan added the extras once more. Munster 21-24 Ulster.

The game sizzled away nicely from there as Munster piled on the pressure. A JJ Hanrahan-led backline began to expose Ulster out wide, a Gerbrandt Grobler Vs Rory Best shemoozle cranked up the heat another couple of degrees and the red wave continued to do just about everything but cross the shore.

Eventually forcing Ulster into losing their discipline, Hanrahan struck a sweet penalty on the sixty-seventh minute to balance the contest at 24-24. But Ulster needed more.

The visitors attacked with vigour for the closing five minutes and came within touching distance of sending the Thomond Park faithful home deflated as Ulster set up a last-minute lineout. However, our Man Of The Match Gerbrandt Grobler rose highest to claim the throw, barrel his way down field and allow Hanrahan to kick the ball out to book a home quarter final against Edinburgh for this day next week.