Simon Zebo provided the spark as Munster saw off a tricky Edinburgh outfit this afternoon at Thomond Park.

This was a match of first and lasts.

Munster headed into their first ever PRO14 semi-final qualifier on a day where the Thomond Park faithful would wave goodbye to Robin Copeland, Gerbrandt Grobler but most notably, fan favourite and all-time Munster top try-scorer Simon Zebo.

Perhaps also a first in that there was t-shirt weather in Thomond Park. The Limerick sunshine set the stage beautifully, allowing both teams the opportunity to express their best work.

Richard Cockerill’s Edinburgh came into this clash in red hot form. Back-to-back wins over PRO14 giants Scarlets and Glasgow gave Munster reason to be cautious approaching this one and as Conor Murray commented during the week, the men in red could ill-afford to start as slowly as they did in Paris two weeks ago to stand a chance of overcoming the Scots and meeting Leinster in the final four.

JJ Hanrahan was the man backed to deliver at outhalf for this encounter and it was the Kerryman who kicked us off in the afternoon sunshine. With a semi-final at stake the opening minutes were physical and frantic as the play at pitch-level matched the strong pre-match sense of anticipation around the stand.

Two men took the headlines ahead of this game – the departing Simon Zebo and the surprise selection JJ Hanrahan – and It would be those two men who had the biggest say in the opening exchanges.

Zebo set the intensity as he showed desire from the off, attacking the visitors with purpose time and time again, but it was Hanrahan who proved instrumental in the opening try.

The 25 year old had been finding touch in some more than useful positions early on and brought the crowd to their feet when one particularly well measured effort from open-play pinned Edinburgh inside their five-metre line with eight minutes on the clock.

From the resulting lineout Edinburgh hooker Stuart McInally went for the over-throw option from which opposite number Rhys Marshall stepped and surged his way over. The confident Hanrahan converted to make it an early 7-0.

Edinburgh did reply well with the carrying abilities of Bill Mata, Duhan Van der Mewe and Magnus Bradbury proving difficult to deal with. And although the likes of O’Donoghue and Marshall showed huge fight and doggedness in defence, penalties were leaked that allowed the Scarlets-bound scrumhalf Sam Higaldo-Clyne to knock over twos shots at goal within the opening twenty-five minutes.

Stephen Archer was forced off half way through the opening forty meaning youngster Ciaran Parker was required from the bench for a rare appearance on a sizable stage. After feeling his way into the game for a few minutes, the 22 year old packed down for his first scrum on the half-hour mark and immediately forced the visitor’s into conceding a penalty – meaning an opportunity for Hanrahan to stretch Munster’s lead from one point to four.

Hanrahan however, failed to get his strike on target this time to relieve Edinburgh of some mounting pressure. The Scotsmen were left off the hook and it almost cost Munster minutes later when it took a desperate covering tackle from Keith Earls to stop promising fullback Blair Kinghorn from going the whole way to the try line after beating one or two Munster defenders for not the first time in the half.

It wasn’t the first forty Munster would have dreamed of last night as Edinburgh forced the men in red into more and more errors as the half progressed, but Johann an Graan’s men still took the most important thing to the changing room – the lead. In knockout rugby, that’s enough. 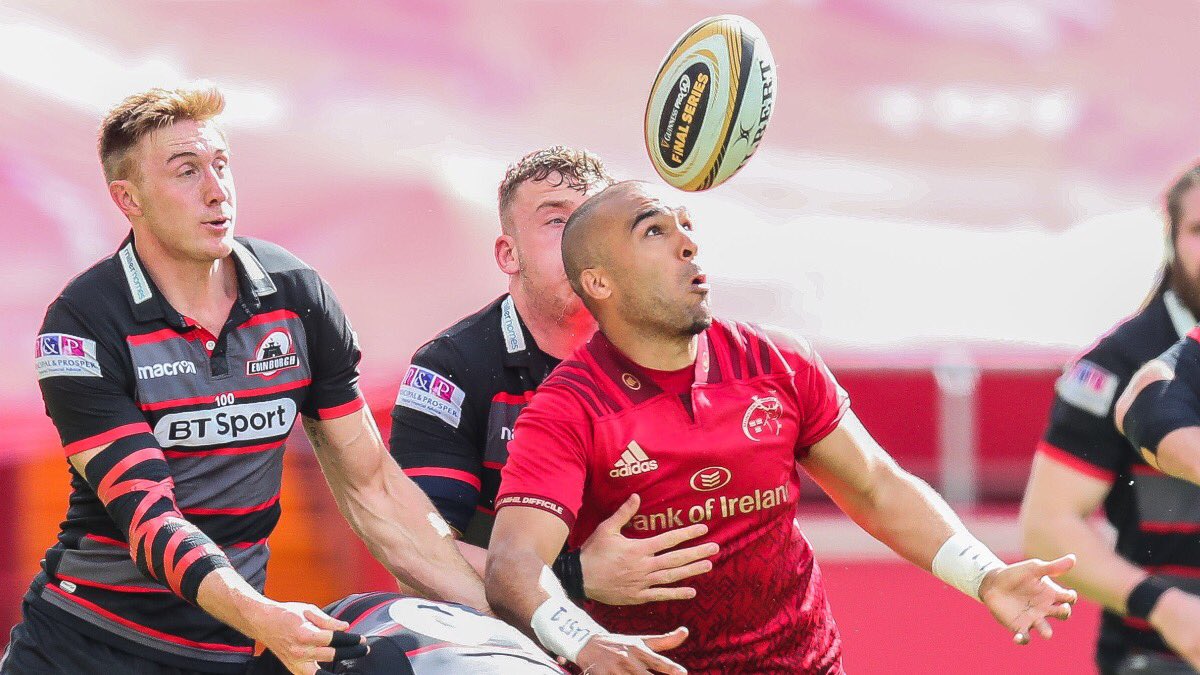 Munster badly needed a spark and for how many years now has that come from one very special player? Just after the break, Simon Zebo gathered the ball in a far from ideal position where most would have taken the tackle and recycled the ball – but Zebo isn’t your average player.

Instead, the Corkman swiveled, chipped, collected and fired a sweet pass into the grasp of the on-rushing Keith Earls who showed his pace to dot down for Munster’s second try. If ever there was a final moment to remember a player by, this was it. The unique imagination, the complete skill-set and the ridiculous confidence of Simon Zebo, all captured perfectly. The noise fell to a hush as Hanrahan put the cherry on top with a well-measured conversion but the booming chorus of ‘Zeeboo, Zeeboo’ soon returned as the 28 year old soaked it all in. 17-6.

The sides exchanged penalties in the following ten minutes before Edinburgh bounced back with a try of their own. Just as Munster began to feel comfortable, Edinburgh replacement scrumhalf Nathan Fowles darted clear of the defence to put his side right back in contention at a scoreline of 17-16.

A nervy closing fifteen minutes stared Munster in the eye and Van Graan hoped the introduction of departing duo Gerbrandt Grobler and Robin Copeland could add Zebo-like inspiration to steer the team home.

It seemed to do the trick. Munster’s forwards took the upper hand at a crucial stage and forced Edinburgh into a late penalty. From forty metres out, JJ Hanrahan, as he did throughout the game, stood up to the plate and struck an excellent attempt between the sticks to make it Munster 20-16 Edinburgh.

Munster saw out the closing exchanges with cool heads to prevent Edinburgh from causing any late upsets. This may not have been an excellent game or an outstanding performance and perhaps it won’t be good enough to topple Leinster in the next round, but as send-offs go, this match just felt so right in so many ways.

Wishing all the best of luck to Gerbrandt, Robin and Simon in your futures away from Thomond Park. On behalf of Munster supporters everywhere, you will be missed.