Hitting the high notes at just the right time.

The big names are back big time as Munster look ahead to the most crucial period of their season. Huge performances from the likes of Peter O’Mahony, Tommy O’Donnell, Joey Carbery and Keith Earls have helped Johann Van Graan’s men to a resounding nine-try demolition of Ulster that should provide some much-needed confidence heading into crunch encounters with Leinster, Exeter Chiefs and Gloucester over the next three weekends. 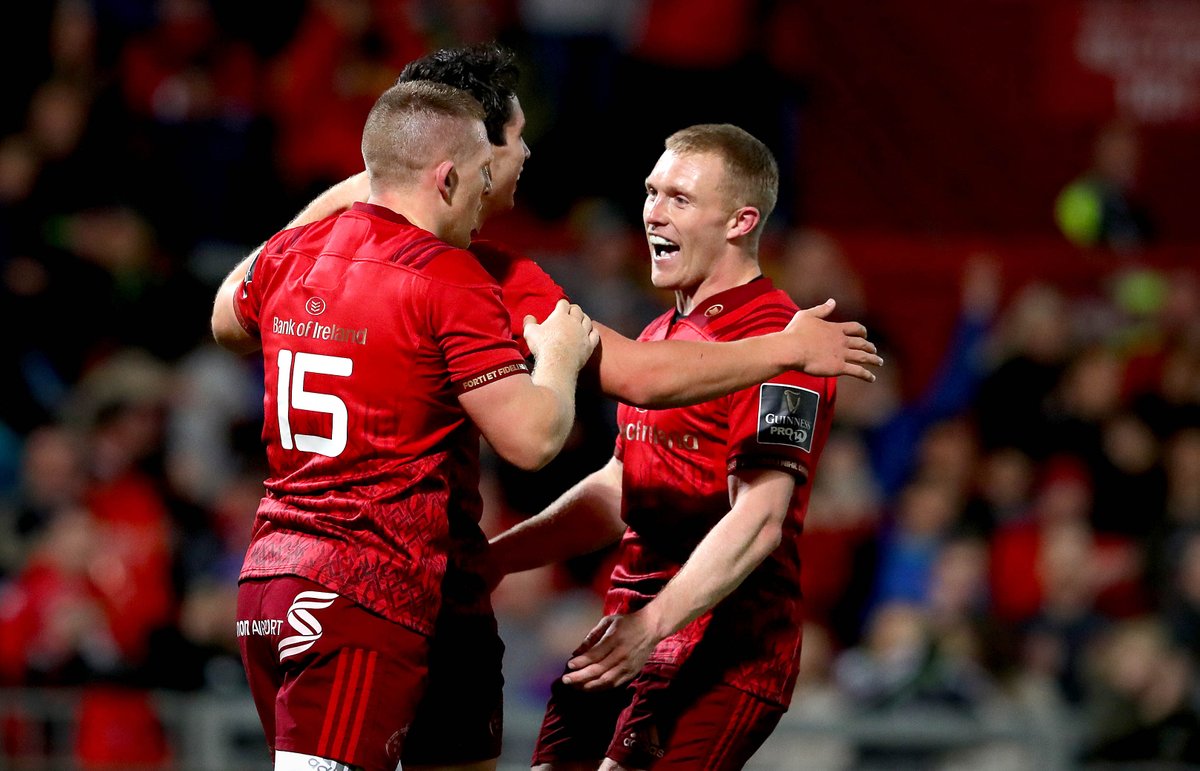 After a scrappy opening five minutes that saw both sides cough up possession with some regularity, captain Peter O’Mahony was the man on hand to spark Munster’s first attack of the game. A scuffed Rory Scannell clearance was chased brilliantly by the 28 year old who ripped the ball clear from an Ulsterman before feeding the electric Alex Wootton out wide on the left wing. Wootton sped away clear of two defenders and with only fullback Peter Nelson to beat, the late addition to the side sent centre Dan Goggin clean through between the sticks.

Joey Carbery converted with ease and began to enjoy pulling the strings on the Thomond Park turf very very quickly. First, a sweet connection from his own ten metre line bobbled beautifully across the right-hand touchline and then minutes later a perfectly judged cross-kick got Munster motoring down the left once more. With a few phases of noticeably expansive play, the seemingly rejuvenated Tommy O’Donnell was on hand to shrug off his tackler and surge down-field into the corner for Muster’s second try within the opening ten minutes. The confident Carbery made it 14-0.

In the seventeenth minute, O’Mahony won his second turnover of the night to the roar of the increasingly enthusiastic Limerick crowd. This time Ulster were pinged for holding on, and from straight in-front by the Ulster ten metre line, Joey Carbery stepped up to stretch the home side’s advantage.

It was as impressive an opening twenty minutes as Munster could have hoped for – in complete contrast to last week’s drubbing at Cardiff Arms Park. O’Mahony was at his his ferocious best, O’Donnell was popping up everywhere, Stander was back breaking tackles like no tomorrow and the halfback pairing of Matthewson and Carbery combined exquisitely throughout.

Munster’s tight five were next to be in on the act, winning a scrum penalty against the head five out from Ulster’s line. After some hard earned pats on the head for Kilcoyne and Archer, Carbery knocked the ball into the corner where the lineout took formation. Niall Scannell, on his first start of the season, threw in and from the resulting maul it was Tommy O’Donnell who barreled over for his second score of the night to make it 22-0 on the half hour mark. There’s life in the 31 year old yet and Chris Cloete won’t have slept soundly tonight.

Munster repeated the lineout routine again on thirty-seven minutes, except this time building phases with some controlled and effective carries once the maul was brought to a halt. The ever-willing Kilcoyne and Holland came close to crossing the chalk, but once the Ulstermen were stretched, Carbery came calling. Five-time All Black Matthewson fed the Auckland born outhalf who in turn sprayed it along the backline to the on-rushing Dan Goggin. The outside centre dove over in space to wrap up a commanding half with the bonus-point in the bag for Munster. 29-0.

It was all tied up by half time in truth, but Ulster started the stronger of the two sides in the second forty. A lineout deep in Munster territory got the ball rolling and after some innovation in the Ulster back division, their stand-out performer on the night Darren Cave found his way over the whitewash to put their first points on the scoreboard. New signing Billy Burns added the extras for Dan McFarland’s men to make it 29-7.

Munster responded quickly with as complete a try as you are likely to see. A maul from ten metres inside the Ulster half rumbled forward as far as the twenty-two metre line before slowing down; the impressive Matthewson slung it out to Carbery and a couple of passes later Alex Wootton was denied a try in the left corner by the slightest of margins. Impressively however, Munster weren’t done and gathered themselves to plough across the face of the Ulster try line before spreading it to the other wing where the inspirational Peter O’Mahony was on hand to add try number five. If he was getting back to his best last season, early signs suggest this year is going to produce something quite special from the British and Irish Lion. Carbery again converted.

In fact, O’Mahony and Carbery had something of a Man-Of-The-Match tug of war going on and on sixty-two minutes it was time for the 22 year old to stake another serious claim. The blistering Alex Wootton got around the outside once more, played a one-two with Goggin and before being dragged across the sideline, the Garryowen clubman lobbed a hopeful offload into the grateful grasp of Joey Carbery who drifted clear down-field to a chorus of cheers from the crowd.

That would be the outstanding Joey Carbery’s final contribution of the night as he was then replaced by Ian Keatley to a standing ovation from the Munster faithful. He’s a little bit special, this kid.

It was soon a half century for Munster as Sam Arnold came on to punish an error from his former side and try number eight followed when unsung heroes Duncan Williams and Billy Holland showed a slick exchange of hands to send Keith Earls through for his first try of the season. Keatley converted both, making it 57-7 to the utterly dominant Munster. It was far from champagne try-scorer Earls was reared, but champagne rugby was in full swing on this occasion.

The final try of the night came through another rapid winger, the prolific Alex Wootton, as he and outside centre Dan Goggin combined impressively for not the first time in the contest. Ian Keatley converted to finish the scoring at a frankly ridiculous 64-7.

If this was a boxing match it would have been called up a whole lot earlier and we can only hope such standards will be retained in the coming weeks. Heavyweight opponents lie ahead, but in this kind of form, the men in red could soon become the Anthony Joshuas of European rugby. A stunning, professional performance.