The winter sun lit up an icy Thomond Park on this Halloween weekend in Limerick as Munster looked to continue their impressive form and erase the spirits of last month’s horror show away to the same opposition.

In action days after inclusion in a talent-packed Ireland squad for the upcoming November internationals were Andrew Conway, Keith Earls, Sam Arnold, Niall Scannell, John Ryan, Peter O’Mahony, CJ Stander, Dave Kilcoyne and Darren Sweetnam. Virtually fully loaded and against a Stuart Hogg-less Glasgow side, a win always felt likely. As we knew full well from past clashes with the Warriors however, it was never going to be an easy task. Bad blood flows between these two and and ever before kick off you wouldn’t be wrong to anticipate another clash in the vain of Donncha Vs Matawalu, Murray Vs Strauss or the absolute episode that was Keith Earls Vs Fraser Brown

Within seconds of typing those last words a mass brawl erupted.

A minute on the clock and some heated exchanges warmed everybody up as Peter O’Mahony got to grips with an opponent before their two sets of teammates rushed to join in on the action. Dave Kilcoyne spoke of the niggle that exists between these two proud sides during the week and well he was not wrong. 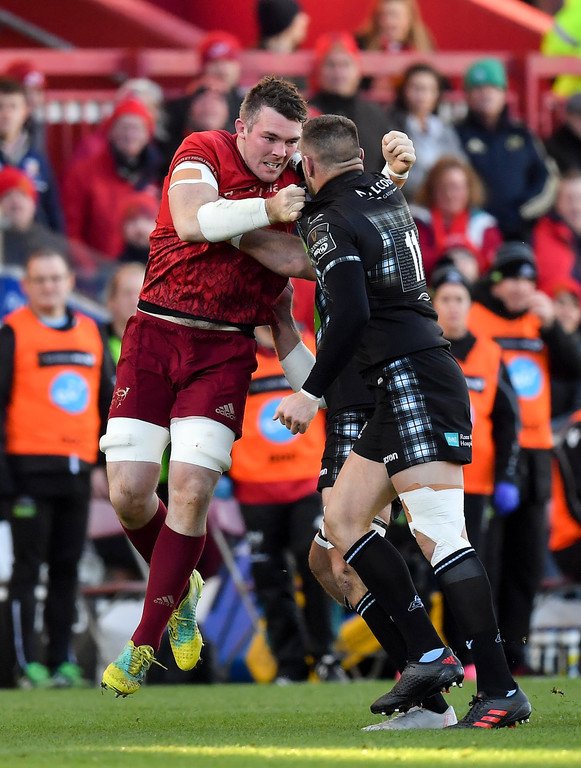 Following a sizable Munster drive up to the half way line, Keith Earls showed all of his pace to explode through a hole in the Glasgow defence and blaze down-field before finding Mike Haley on his right shoulder. The new signing was dragged down inside the Glasgow 22, but Munster were rewarded with a penalty for their efforts. Making a bold statement with less than ten minutes on the clock, Hanrahan kicked for touch and following some industrious forward play, in-form prop forward James Cronin bundled over for his side’s first try. Hanrahan converted putting Munster seven points to the good.

Glasgow were under immense pressure. Tough tackling from the Munster backs forced knock-ons, O’Mahony blocked down a clearance kick and Dave Rennie’s men’s basic skills in general began to evade them under the unrelenting circumstances. Twenty minutes into the game and there was only one team asking the questions.

Unfortunately all that time in possession counted for little as 25 minutes in, Glasgow scrumhalf George Horne found himself with all the space in the world wide on the left wing. With fifty metres to dart into, the 23 year old made his way over the Munster line and despite the best efforts of covering winger Keith Earls, grounded the ball to cut Munster’s lead to just two points.

Glasgow were suddenly on the ascendancy. Their try proved to be just the kick they needed and their subsequent extended period of dominance meant a trademark lineout steal from O’Mahony on 32 minutes was but a rare moment of relief for the hosts.

Lightning struck twice as before the half was out a poor read in defence from Sammy Arnold opened the door for Glasgow once more. After the initial break, a slick showing of hands from Nick Grigg was enough to put George Horne through for his second try in the space of ten minutes. This time his brother and half-back partner Peter was able to convert, making it 12-7 to the away team.

The second half commenced with Munster deep down in Glasgow’s end, much like the start to the first. However, the Warriors counter-attack was becoming more and more of a problem and on this occasion, they passed their way from end-to-end, eventually sending fullback Ruaridh Jackson through on the right-hand touchline. It looked as though the former Wasps star was destined to score, but Peter O’Mahony, who had been down injured for the whole passage of play, had other ideas and gathered himself to hold him up just shy of the chalk.

Chris Cloete was also on hand to help, but unfortunately for Munster, the South African was flashed a yellow card for his involvement and that of course handed Glasgow the opportunity to pounce once more. Dave Rennie’s tartan army packed down for the scrum and following consecutive penalties, number eight Matt Fagerson picked and barreled over Munster bodies before touching down. 17-7 and what seemed like an ever-growing mountain for Van Graan’s men to climb.

With fifty minutes on the clock, Munster appeared bereft of ideas. Mike Haley glided across the pitch without any conviction and then as Hanrahan proceeded to do likewise, an air of frustration and impatience filled the terraces. Then, in the blink of an eye, the mood changed. As Hanrahan glided from left to right, he jinked from foot to foot to punish the slightest of gaps in the visitors’ back division and pelt goal-wards for what would have been one of the tries of the season. Like anything on the night for Munster though, it wasn’t to be. The Kerryman was held up excellently and Munster had to make-do with a scrum five metre out. The frontrow to their credit, were able to muster up an important penalty which Hanrahan gladly knocked over to make it a seven point game.

But it wasn’t a one score game for long. As the rain began to bucket down on the Munster faithful, the opposition plotted their way back into firing range. The men in red leaked a penalty or two (a theme continuing from the second half of last week’s fixture with Gloucester) and with advantage to play, Glasgow’s brilliant brothers showed their chemisery as scrumhalf George Horne chipped over the Munster defensive line five metres out and flyhalf Peter rose highest to add another seven points to their side’s tally. 25-10.

Yet Munster refused to lie down without a fight of the right kind. The red wave drove forward into their Conference A rivals and when a sizable overlap was created on the left flank, Munster’s backs had the skills required to finish the job. Earls drew the defenders, fed Mike Haley and in turn, the 24 year old sent countryman Alex Wootton clean through by the left-hand touchline. Keatley failed to convert but the Munster supporters rallied behind their troops as at least now a comeback wasn’t out of the question.

The intensity of the home side was turned up a notch or two from the kick off, another substitute Arno Botha making a simply monstrous rampage down field to get the ball rolling once again. In a state of panic, Glasgow leaked a penalty and that granted Munster another serious chance. Down into the corner they went and while the forwards trucked it up at first, it took a snipe from scrumhalf Alby Matthewson to give Munster the all important try they needed. Keatley converted this time to make it a two point game. The comeback that nobody thought was possible was now on.

Two minutes left on the clock and just inside their own half, Glasgow did everything they could to keep it tight and see out the clock. The visitors were having some great success too, but with only twenty seconds and perhaps only one more phase yet to play, Munster piled in the bodies and forced their rivals into ‘holding on’ to get one last incredible opportunity.

Peter O’Mahony went down for treatment following his endeavours, allowing tension and anticipation time to build and build. By the time the captain rose to his feet everyone in the stadium was braced for a final punt into the corner…but then, from fifty yards out, up stepped Rory Scannell.

Two points down, eighty minutes on the clock, three points on offer, fifty metres out. After so much great work from his teammates to get back into this position, the pressure was on. This was his Ronan O’Gara moment.

The crowd fell to silence, Rory took a breath, a couple of steps back and the beautiful bastard proceeded to smash it between the sticks to an absolute eruption of noise from the Munster supporters!

One of those brilliant nights at Thomond Park. What more can a man say.