It’s funny really, you spend every training session trying to get one up on the lads vying for your place, but when circumstances like this arise it’s almost like they circle the wagons!

Our very own Conal Lane had the opportunity to sit down and have an emotional chat with recently retired Munster star Johnny Holland in Cork. This is how it panned out:

Conal Lane: How has the past week been for you?

Johnny Holland: Manic, in a word! Trying to keep myself busy, almost trying to find something worth getting out of bed for in a way. Responding to the calls and texts from family and friends. I’m actually a little taken aback by the amount of people lending their support, I wasn’t aware that there were this many people looking out for me!

CL: How did Rassie Erasmus and the new coaching ticket take care of your issue in this tough time?

JH: The whole coaching team have been superb both personally and professionally. Rassie has been incredible, an injury forced him into retirement too so he was able to lend his full support and understood my situation as much as anyone else. Jacques Nienaber being a qualified physio helped hugely. The South Africans I find, are very much like the Irish – caring and more than willing to throw an arm around your shoulder if and when you need it.

CL: And the players? In particular your competition for the 10 jersey?

JH: It’s funny really, you spend every training session trying to get one up on the lads vying for your place, but when circumstances like this arise it’s almost like they circle the wagons! Keats has been messaging me on and off over the last few days and Tyler called me personally to express his disappointment when I made the announcement. To be fair all the guys have been outstanding, they know playing for Munster is a dream so few can achieve so when that dream is cut short they help in whatever way they can.

CL: What had you set out as your goals for this season prior to the recurrence of your hamstring injury? I understand Joe Schmidt was in contact...

JH: Yeah I had a clear goal set out. First was to basically kick on from the end of last season and start a run of games at the beginning of the season and look to establish myself as the first choice out-half. Joe hadn’t contacted me directly about my Ireland prospects, my name was mentioned over the summer as one to watch for a call up. I’m not sure if I believed myself I was that close to an Irish call up…

CL: I and plenty of others did!

JH: *laughs* Cheers, but there’s plenty of guys in the mix before you get to me! For example you’ve got to be performing at the same level as (or even better than) Jonathan Sexton, Paddy Jackson, even Keats and Jack Carty. Ian Madigan too, regardless of where he’s playing his club rugby.

CL: New Zealand in November would have been some baptism of fire though!

CL: Did you ever think you might have had your head turned by an offer from abroad? (Saracens, Stade Francais etc)

JH: Nope. Never wanted to leave Munster. When I was about 14-15 and I really started thinking “Hang on I could actually make a career of this” It was only ever a Munster jersey I wanted to pull on. I bought into the Munster ethos, the belief in the club & that lies within every player. The joy of running out in Thomond or Musgrave (particularly Musgrave) Park in front of family and friends. That’s something I know I couldn’t experience away from Munster. In short, I always wanted to be at Munster as long as they wanted me.

CL: Now that you look back, what were your stand-out Munster memories from your time in the red jersey?

JH: Leinster last season I reckon. 50,000 people in the Aviva, a lot of people close to me travelled up which I was really appreciative of. Scoring all 13 points was a huge plus too, shame about the result though!

JH: Yeah of course! I think anyone would be! Actually that run of fixtures towards the end of the season was something I’ll look fondly back on, starting for the games vs Zebre all the way through to the Scarlets. Knowing that the coaching team were that confident in me gave me a massive boost

CL: Was the final decision to retire yours?

JH: Yeah the decision was mine. It needed to be mine, the first step of the healing process I guess! Of course it would have been easier for someone to say “Look Johnny we’re gonna retire you” and take it out my hands, rather than letting me be the one to pull the trigger on it. Would have been easier in the short term definitely, but I guess knowing that someone decided on my behalf over time maybe some resentment would have grown that I wasn’t the one to make the final call. 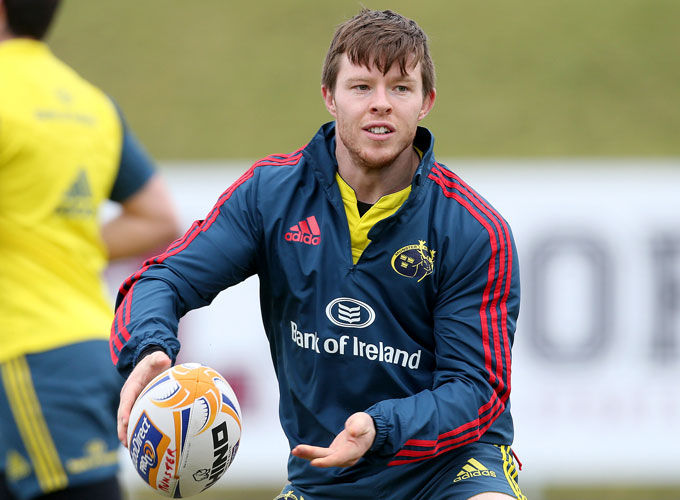 JH: Nope. Zero. I always maintained that I’d have nothing to regret!

CL: In a sense, are you almost a little relieved that you’re retired? Like you don’t have to worry about being fit to take to  the field again?

JH: Yeah there’s a weight off my mind alright. There were days where I’d be a bit sore and stiff after doing even a short walk and my head would be a mess of ” Can I train tomorrow? I don’t want to miss a session, miss a session [and] you’re one step behind coming up to matchday”. I’d have been conscious of the strain it put on my girlfriend Chloe also, as I said simple things like having to take a regular break if we were out taking a walk. She’s been outstanding, very supportive and understanding and she’s given up a lot to be on this journey with me. We were in Orlando recently and visiting a theme park, I felt really self – conscious that she might not have enjoyed it as much when I was having to pace myself each day.

CL: Sir Alex Ferguson said he could now enjoy watching Manchester United after he had retired, is there a similar feeling for yourself?

JH: Admittedly it was tough to watch the lads playing the Scarlets last weekend, still trying to feel like you’re involved. But yeah I think I can relax a bit more and stick to being a Munster fan, and definitely enjoy watching the games. I’ve no need to be worrying about the impact on me of Tyler or Keats having a storming few games now!

CL: What’s next for Johnny Holland?

JH: I’d have said a few years back that coaching wasn’t really my thing, but hopefully I still have something to offer Munster and rugby in general. I’m meeting up with a few people in the next week to chat about doing some coaching certs and the like. I’d like to stay involved with rugby if I can.

We’d like to say a big thank you to Johnny for taking time to talk to Conal and we wish him all the best in the future!

Also, cheers to Conal for arranging and carrying out the chat.